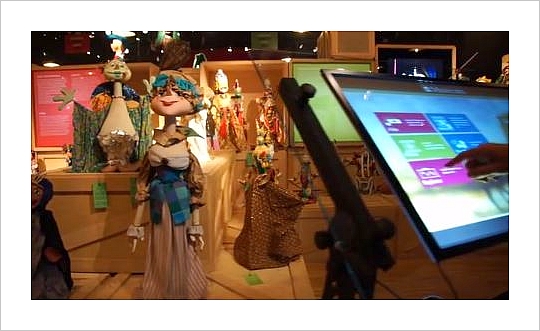 Imagine showcasing your product demo on a drafting table that works like your iPad. Imagine hooking a projector to this table for large screen presentations on the nearest wall.

Now imagine all you need is your laptop to bring these features, and many more, to life.

Creators of the IKKUT touch screen podium have been working to make all of this a reality. Simply install the driver for your computer’s operating system, connect the single USB port and you’re ready to go, the company’s Kickstarter page promoting a campaign raising money for the device insists.

The campaign, started by Azkenmedia, a Spanish based company trying to make this presentation tool a reality, is currently nearing its end.

Here’s a video that showcases the IKKUT:

The IKKUT touch screen podium features a steel structure casing for the touchscreen which is position adjustable from 0 to 90 degrees, made of 6mm tempered security glass, and features true multi-touch with response times of only 7 to 13 milliseconds.

The infrared capacitive touch screen itself measures 40 inches and could be made available in a two or six point multi-touch display. The steel structure supporting the display measures 56.7 in. x 23.6 in. and would come coated in a matte black powder paint.

So why such a massive touch screen? On the main website for the prototype, project director Fernando Elola explains:

“Human touch is a must, an internal response to interact with other human beings.”

In a world where people are surrounded by touch screens on phones, tablets, computers and even watches, why not include a large screen which can allow you to showcase something in a new and intuitive way?

For example, a developer could create a phone app, then showcase it on a screen large enough for an entire room to see.

Though there are obvious possibilities for business applications, the IKKUT touch screen podium could be used for education in schools, museums or exhibitions, TV studios, or even at home for personal entertainment like movie projection or party games.

IKKUT is able to project using nearly any rear projection system, and comes with a special tray to attach your laptop and the projector unit.

The team that created IKKUT touch screen podium was planning on a fifty unit production run. Unfortunately, with only 10 backers and only $3,203 of their $105,000 goal raised so far, the device may not see the light of day just yet.

So the IKKUT ends up not only being an interesting prototype because of its business applications, but also an example of what can go wrong in a Kickstarter campaign.

The Kickstarter page for the project includes a note from Elola, informing potential and existing backers that the campaign is reaching its end without sufficient money to make the device a reality.

The campaign ends July 30, 2014 and seems unlikely to reach its goal. But Elola insists it has been a positive learning experience in any case.

Shawn Hessinger is the Executive Editor for Small Business Trends. A professional journalist with more than a decade of experience in the traditional newspaper business, he has another 10 years of experience in digital media for trade publications and news sites. Shawn has served as a beat reporter, columnist, editorial writer, bureau chief and eventually managing editor with responsibility for nine weekly newspapers, the Berks Mont Newspapers. He is also a member of the Society of Professional Journalists.
5 Reactions
Subscribe
Follow @smallbiztrends
RSS LinkedIn Pinterest iTunes