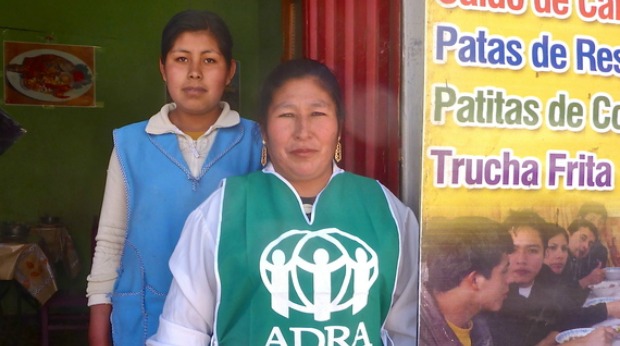 When Eulalia Martinez Quispe’s husband passed away unexpectedly at age 34, she had to find a way to support her family on top of dealing with her own grief.

She didn’t have a lot of resources at her disposal. But she did have a unique skill. Her specialty is making lamb’s head stew, a delicacy in her home in the Andes Mountains of Peru.

She began by making the stew at home and selling it on the street just to help make ends meet. Now, she has her own restaurant, Caldo’s Café. And customers travel from all over the country to sample her cooking.

But it wasn’t always an easy road for Quispe. About 20 years ago, she was selling food she made in her home from a simple street cart. Ten years later, she joined a local credit group to rent her own space. It was around this time that her husband died of a heart attack, so she became the sole breadwinner for her three children.

For that reason, she is very careful with the loans she receives. After paying the rent, she spends whatever is left of her funds on ingredients for her food and upgrades to her space. She continues to apply for more funding each cycle, but is careful not to overextend.

Her restaurant is small, with just seven tables that are always occupied during busy hours. And she has one employee, her niece who is working her way through college.

Though her business was born out of necessity, Quispe has found a way to make it work. The operation isn’t large, but she has used the funds she has to bring in a steady income and support her family.

Above all, Quispe credits her success to a lot of hard work. The restaurant is open from 6 a.m. to 9 p.m., and usually closes for a few hours during siesta. But Quispe normally takes that time to purchase more inventory. She told The Huffington Post:

“I am [both] the mother and the father of my children, so I need to work many hours.”

Her three children have no doubt benefited from Quispe’s unconventional business. Her oldest child now even has a daughter of his own.

Quipse would like to one day upgrade to a larger space and continue making her lamb’s head stew, along with other dishes. But for now, she’s just happy for the opportunity to make a living for her family.