How a Meetup Group Led a Mompreneur to Launch a Business 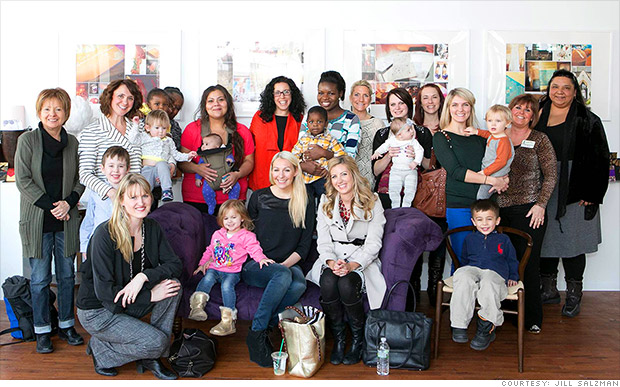 Jill Salzman (pictured center above, in orange) was already a mom and an entrepreneur before she launched The Founding Moms’ Exchange in 2009.

The mother of two was juggling multiple businesses, including a music management firm and a children’s accessory line. And she wanted a way to connect with other mom entrepreneurs.

So she used the website Meetup.com to start a group in her hometown of Oak Park, Illinois. Moms would get together monthly to swap tips and collaborate with one another. Within 6 months of the initial gathering, the group had grown to over 200 members.

Eventually, the group began to grow beyond the Oak Park meetup. Moms wanted to see groups set up in other cities. Salzman was happy to see the growth, telling CNN:

“One of the women who was attending said, ‘I hate driving the five miles [to Oak Park], so let’s open one in Chicago.’ And then I thought, ‘Let’s open one in L.A. where I used to live, then in New York, where I’m from.’”

Now, Salzman oversees offline groups that meet in 43 different cities and 9 countries. The Founding Moms’ Exchange has over 8,000 members that participate in these groups.

But Salzman has also expanded The Founding Moms beyond the offline groups. Today, the group website includes podcasts, newsletters, and an online community where members can connect with other mom entrepreneurs. Membership to the site costs $37 per month.

Salzman also monetizes her business through speaking engagements, books, and the Founding Kit, a service to help entrepreneurs grow their businesses.

Entrepreneurship among mothers has been a growing trend for years. Often, these moms see a gap in the market that affects their own lives, and then choose to fill it themselves.

In this case, Salzman wanted a way to get together with other entrepreneurial moms and didn’t see an existing opportunity in her area. So she created one. As it happens, other moms were looking for the same thing. And that’s why The Founding Moms has been able to grow to where it is today.