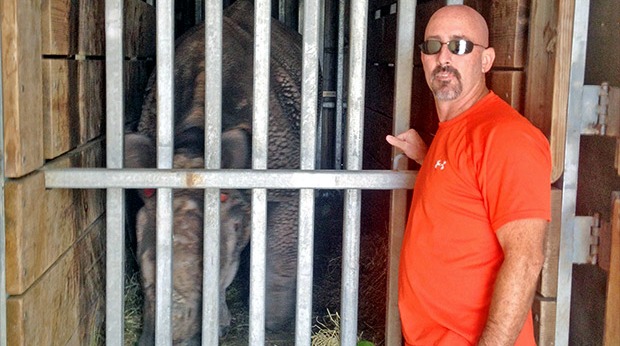 The next time you’re driving down the highway, you could be right next to a rhino and not even realize it. Entrepreneurs like Chris Danhauer make a living transporting zoo animals to other locations for breeding, conservation, or educational purposes.

It’s an unconventional business, to be sure. But someone has to be responsible for moving giraffes and gorillas.

Before starting his business, Planned Migration, Danhaur was a zookeeper. He said it was that experience that allowed him to build up trust and a good name with the zoos that use his services. He told CNN:

“If I wouldn’t have had the skills and qualification, there would have been no way [zoos] would have touched me.”

He is the founder and sole-employee of the Texas-based company. He takes a lot of care when loading and unloading the animals and he supervises the animals during each trip. One of the benefits of transporting animals by road.

Zoos don’t just use companies like Planned Migration to transport animals. Some utilize air travel, commercial flights, and even priority mail. The size and temperament of each animal helps determine how they should travel.

Road travel is certainly a popular option though. Planned Migration moves more than 200 animals per year. Most of those moves occurring during the spring and fall.

Danhaur’s trips usually take less than 24 hours total. Price varies by distance and type of animal. Moving a small antelope a short distance could cost as little as $500. But moving an elephant hundreds of miles could cost up to $12,000.

Aside from loading and unloading the animals, driving and supervising, Danhauer said that planning each trip is key. Some animals require extra training before being transported. Other times, Danhauer just has to coordinate with other institutions to ensure a smooth trip.

Ideally, you shouldn’t even be able to tell when you’re driving next to a zoo animal. Though some of them are a little difficult to hide. So next time you see a large crate being pulled by a truck on the freeway, take a closer look. It could be Danhauer or another entrepreneur transporting some of your favorite zoo animals.