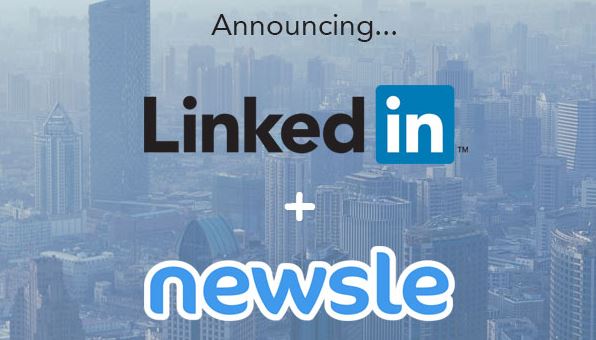 LinkedIn has bought Newsle. The service lets you import your contacts from both LinkedIn and Facebook and then scan for mentions of people in your network on the Web.

Newsle will continue to operate as a stand-alone service, but will also be further integrated into LinkedIn’s other products.

“LinkedIn and Newsle share a common goal: We both want to provide professional insights that make you better at what you do. For example, knowing more about the people in your network – like when they’re mentioned in the news – can surface relevant insights that help you hit your next meeting with them out of the park.”

Meanwhile, in a complimentary post on the Newsle Blog, co-founders Jonah Varon and Axel Hanson added:

“We founded Newsle with a simple goal: to deliver important news about the people who matter to you.

Three years and 2 million users later, we’re happy to say that we’re well on the way toward realizing that goal. LinkedIn is equally passionate about offering insights that can help professionals better do their jobs and will help us accelerate our efforts by making Newsle available to its members.”

The move is apparently part of an ongoing attempt by LinkedIn to dominate the online relationship market, observes The Next Web’s Paul Sawyers.

But what is equally interesting is that the announcement comes at a time when LinkedIn has been actively closing its API to other third party developers of relationship building software like Nimble.

And there may be much more to come, said Brent Leary, founder and managing partner at CRM Essentials, in a conversation today with Small Business Trends about the purchase.

Leary says he wouldn’t be at all surprised to see LinkedIn leveraging the data of its more than 200 million members to create a powerful customer relationship management service of its own for the B2B community.

In a Skype conversation this afternoon, Leary explained:

“Pretty interestingly they have put these pieces together and now you’re starting to see the fruit of some of that…All of this kind of adds up to LinkedIn being in a pretty unique position to have the most updated business content and the context to understand that content.”

The acquisition of Newsle is only the latest in a series of acquisitions of related tools by LinkedIn. Those previous acquisitions include Connected, a Web-based professional contact manager, and Rapportive, a service that allows you to manage contacts from your email inbox. LinkedIn recently released a new Connected App updating its service.

Leary says he could see a new LinkedIn CRM service, if one is developed, being either a CRM “light” to be used with other LinkedIn features or a “layered” service with freemium version and paid options for higher levels of service.