What’s the Real Reason Google Plus Authorship Photos Are Gone?

Googler John Mueller shocked the SEO industry last week with his announcement that Google authorship photos are gone and circle counts are now removed from the SERPs.

The big question is: Why?

Why would Google kill a feature they had said would instill user trust in quality search results and help valuable content stand out? And why did they want us all to implement it in the first place? Was anything we were told about Google+ authorship markup and profile images in search true to begin with?

It didn’t take Moz’s Rand Fishkin long to tweet his thoughts on the motivation behind the change:

IMO, most compelling explanation for Google removing profile pics from search is that it distracted from ads, and cost advertisers clicks

And even more pointedly:

I am frustrated @JohnMu saying that it will not cost CTR. Either Google lied about the increase in CTR with photos, or they’re lying now. — Rand Fishkin (@randfish) June 25, 2014

Since Google+ authorship and the rich snippets with photos in search results were implemented, we’ve seen eye tracking studies point to additional attention for the enhanced results. We’ve seen research from Catalyst and Cyrus Shepard – and even Google itself – supporting the notion that results with authorship photos have higher click-through rates than their plain text counterparts. Our own internal research also confirms this. 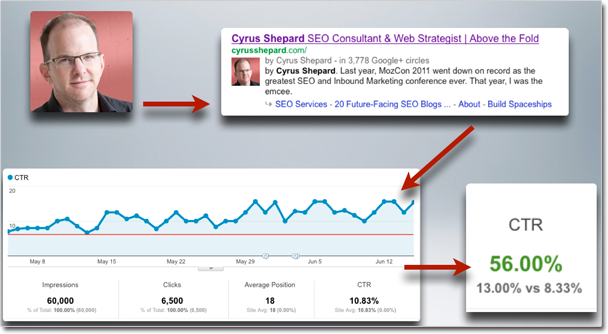 So what’s going on?

Google+ Authorship Clicks Had To Come From Somewhere

Clicks on the search results page are basically a zero sum game. If there’s an increase in CTR for one part of the SERP, some other part is losing that click. There must be a decrease in CTR elsewhere – and that includes the ads.

We know images in the SERPs have a big impact on users – and click-sucking monsters. Google knows this, too, which is why Google’s Shopping Ads (formerly Product Listing Ads) aren’t plain text.

Maybe Google realized they were giving away free branding with authorship markup – at the expense of paid clicks. Besides, they have their own Sponsored Posts on Google+ for authors who want to promote themselves.

Was it another way for Google to “break the spirits of SEOs,” by taking away a feature they had adopted wholeheartedly? That may be taking things too personally.

UPDATE: Check out Elisa’s alternate theory on why Google+ author photos are going away.