Selling an Android Phone? Your Data May be Recoverable 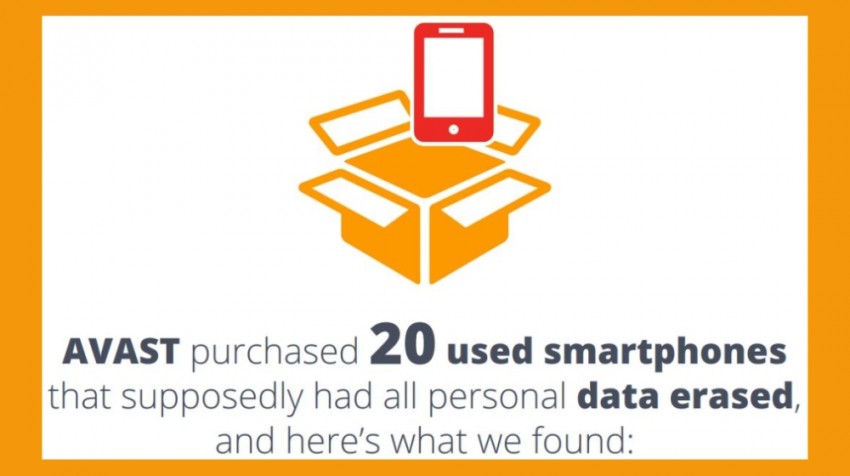 If you’re thinking of selling your business smartphones because you’ve upgraded or switched to new ones, you’ll instinctively think to wipe the data first.

Most phones have a simple means of restoring the devices to factory settings. But a new study (click image above to see the full graphic) finds that that’s likely not enough to completely wipe some phones clean.

Security software company Avast says it purchased numerous used Android phones online. The previous owners of these phones stated that they had either done either a factory reset or “delete all” on the devices. Despite that, Avast was able to recover a lot of private data and thousands of photos. The company used data recovery software that’s readily available to find the data.

But the fact that the data could be recovered at all should give you pause before you decide to sell.

In an official announcement from the company, Jude McColgan, President of Avast’s mobile division, explains:

“The amount of personal data we retrieved from the phones was astounding. We found everything from a filled-out loan form to more than 250 selfies of what appear to be the previous owner’s manhood.”

The company says it purchased 20 used Android smartphones from a variety of sellers online. It used the recovery software and found the following data that the previous owners likely thought they were deleting when they reset the devices:

So if you’re considering putting your old smartphones up for sale on the Web, think about who may be purchasing it. If they run any widely available recovery app, they could gain access to your personal and business data, including credit card numbers, bank account information, and contacts.

“More than 80,000 used smartphones are for sale daily on eBay in the U.S. Along with their phones, consumers may not realize they are selling their memories and their identities. Images, emails, and other documents deleted from phones can be exploited for identity theft, blackmail, or for even stalking purposes. Selling your used phone is a good way to make a little extra money, but it’s potentially a bad way to protect your privacy.”

According to a cNet report on the study, Avast researchers were easily able to access data like SMS messages and private user data with apps like FTK Imager, which is drive imaging software.