Startup Uses Facebook to Sell Cotton Candy for a Cause 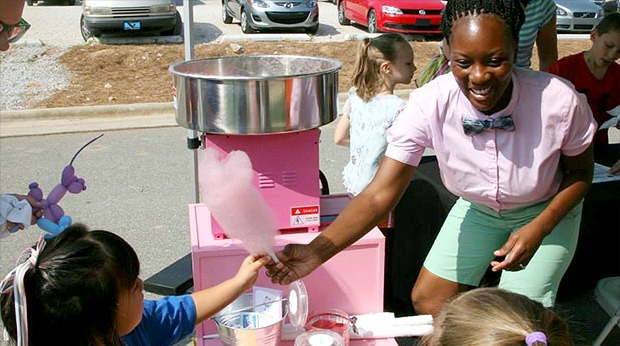 Tasha Kornegay launched her startup, Oscar William’s Gourmet Cotton Candy, less than a year ago. But she’s already recouped her original investment 20 times over. And there’s one tool she credits with that success – social media.

The company currently has more than 1,000 Facebook fans, and recently launched accounts on Twitter and Instagram as well. Kornegay said that 75% of all the company’s sales come from its Facebook page. She told CNN:

“We post almost daily. We recap events, we give a shout out to our fans, we even do fun surveys asking for suggestions about new flavors.”

Kornegay and her husband began selling cotton candy at a fundraiser for her HIV/AIDS awareness efforts in June 2013. Kornegay, who is a mental health therapist in Apex, North Carolina, had been writing grants in an effort to raise funds for the cause. But when she realized her grant writing efforts weren’t raising enough money, she needed to find another solution.

Her son, who was 14 years old at the time, was a big fan of cotton candy. He’s the one who originally suggested selling the sugary treats online and at local events to raise extra money.

The first fundraiser was a success. So a few months later, Kornegay and her husband invested $2,000 of their own money to officially launch their business.

Today, the company continues to donate 10% of sales to HIV/AIDS awareness efforts. They sell certified organic and kosher cotton candy in more than 20 different flavors. And they continue to find customers for their product at birthday parties, weddings, corporate fundraisers, and other events.

So how did they stumble upon social media and Facebook in particular, which still generates the majority of their sales?

Well, the company had limited startup funds to work with and wanted to donate as much of their earnings as possible. So social media was their only real marketing option.

Once on Facebook, Kornegay and her husband soon figured out it was not enough to just sign up for an account and hope that fans show up. Since using social media was a necessity, they had to make the most of it. So they got into the habit of updating the Facebook page often and regularly interacting with fans.

It has been a recipe for success that has allowed their reach to grow exponentially within the first year.