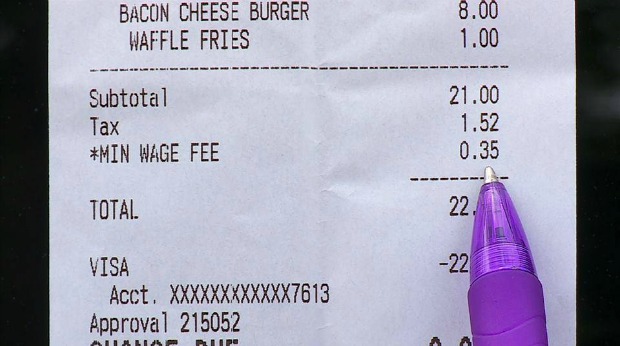 A Minnesota restaurant is getting mixed reviews about a new fee added to its bills. But it isn’t the 35-cent surcharge itself that has customers taking notice. The fee, added to each bill after the tax charge, is a designated minimum wage fee.

Minnesota raised its minimum wage by 75 cents earlier this month. It is the state’s first minimum wage increase since 2009.

So the fee, enacted by Oasis Café in Stillwater, is meant to offset some of the added cost for the restaurant due to the increase. Management has estimated that the pay increase will cost the business more than $10,000 a year.

So it seems necessary for the independently owned restaurant to pass along some of that added cost. But designating the fee as such isn’t quite as necessary. And it has definitely turned off some customers, who have taken to leaving negative reviews and comments on social media.

“It’s Oasis way of blaming our government for trying to set a fair living wage. It is political grandstanding.”

But not everyone has taken issue with the fee. Some customers on social media have voiced their understanding or approval of the restaurant’s actions. The company’s owners and employees have also chimed in to voice support and explain the thought behind enacting the fee.

Owners Craig and Deb Beemer posted a statement to the company’s Facebook page, further explaining their decision to employ fee:

“Our decision to offset the recent increase in minimum wage was what we believed to be the most honest and transparent way to communicate a significant increase in our operating cost. Rather than raise menu prices, we decided to charge a flat fee per guest check.”

Raising menu prices slightly seems like the more conventional route to take when faced with added costs. That likely wouldn’t have led to so many angry customers. But it also wouldn’t have called attention to the reason why the increase was necessary, which was apparently the owners’ intent.

Since the minimum wage increase has already gone into effect, it seems the fee isn’t going to make any major changes on that front. But the owners have stated that they would like for Minnesota to pass a tip credit, as 43 other states have done.

This is a way for employers to apply the amount of tips employees regularly receive against the business’s minimum wage requirement. So it is possible that the attention gained by enacting this fee could contribute to a push for such legislation.

Annie Pilon is a Senior Staff Writer for Small Business Trends, covering entrepreneur profiles, interviews, feature stories, community news and in-depth, expert-based guides. When she’s not writing she can be found on her personal blog Wattlebird, and exploring all that her home state of Michigan has to offer.
7 Reactions
Subscribe
Follow @smallbiztrends
RSS LinkedIn Pinterest iTunes