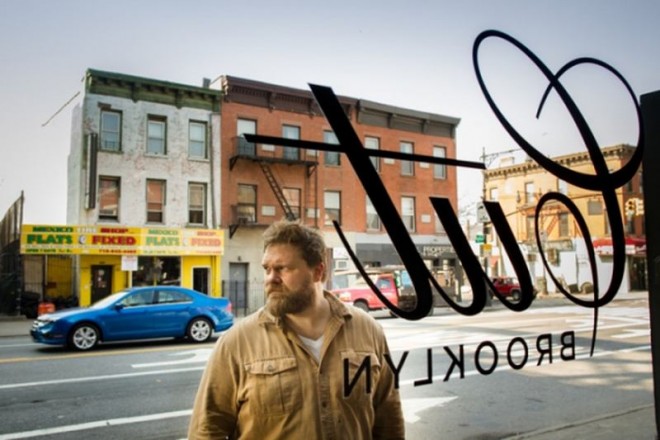 Joel Bukiewicz’s path to entrepreneurship was anything but typical. When Bukiewicz couldn’t sell his first novel, he decided to take a break. And he soon picked up a new vocation instead: making knives.

What started out as a ‘creative outlet’ quickly grew. Today he’s carving out his own niche with his shop Cut Brooklyn.  He’s crafting some of the most sought after, high end, hand-made kitchen knives you can find outside of Japan. Among other things, the knives often feature colorful handles in bright yellow, lime green, orange or purple.

His business now sells worldwide, with prices for his knives pushing the high hundreds of dollars. The waiting list for a knife can be up to two years. Stock changes frequently on the Cut Brooklyn site, offering a handful of knives at one time with prices ranging from around $250 to over $700 dollars per knife.  He uses his Twitter feed, @CUTbrooklyn, to alert followers when the latest knives are available, saying something like “fresh knives just went up!”

“My mission is to build you a beautiful knife that performs at the very highest level for a lifetime of service and enjoyment.”

Bukiewicz started out with hunting and sports knives. But within four months there was a waiting list online for his work. The mild success excited him, and he continued to evolve his craft, spending two years trying to perfect the kitchen knife.

Then, Bukiewicz was approached by Edible Brooklyn photographer Michael Harlan Turkell about doing a story on his craft. The article that Turkell wrote was read and shared all around the world. Soon after, orders began picking up.

Cut Brooklyn is known for two signature knives, called the Prospect 240 and the Prospect 120 Petty. But the shop also sells butcher, boning, and filleting knives. Each knife takes around fifteen hours to craft and is entirely made by hand. The only thing done out-of-house is the tempering process for the steel.

Bukiewicz has been approached by famous chefs eager to buy his knives, but these are not the customers he focuses on the most. In an interview, he told Nona Brooklyn:

“…I sell knives to people all over the world, but the big majority of my customers live within a few miles of the shop. And I’m really proud of that. I’m much more proud of that than I ever am of selling a knife to someone who happens to be famous.”

Watch Bukiewicz work in a video created as part of the series Made By Hand and see this unique entrepreneur in action.