LLCs are a Hot New Trend Among Sole Proprietors 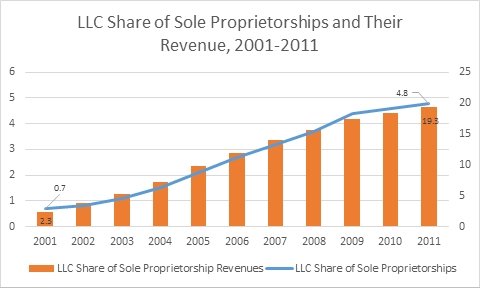 Unless you are an accountant specializing in small business, you may not be aware of a new trend in the world of sole proprietorships: registering with the Internal Revenue Service (IRS) as a limited liability company (LLC). While LLCs have been around since 1977, their popularity among sole proprietors has accelerated in the past decade, data from the IRS reveals.

The figure above shows the fraction of sole proprietorships organized as LLCs along with their share of the revenues of all Schedule C filers from 2001, when the IRS first began to provide these data, and 2011, the most recent year for which these numbers are available.

Moreover, the pace of LLC proprietorships’ income and revenue growth has been greater than their increase in numbers over the past decade. Between 2001 and 2001 the revenues of LLC proprietorships went up nearly ten-and-a-half-fold increase, their income rose twelve-fold, and their numbers increased nine-fold, IRS data show.

Why the Popularity of LLCs Among Sole Proprietors?

In a word, it’s liability.

LLCs provide the liability protection of a corporation, but with less paperwork and record keeping.

That’s attractive to sole proprietors. With an LLC structure, the owner’s business liabilities are limited to the assets owned by the LLC. But income from a single member’s LLC is still recorded on Schedule C of the owner’s tax return where a sole proprietor would ordinarily report his or her income.

Image Source: Created from data from the IRS Statistics of Income