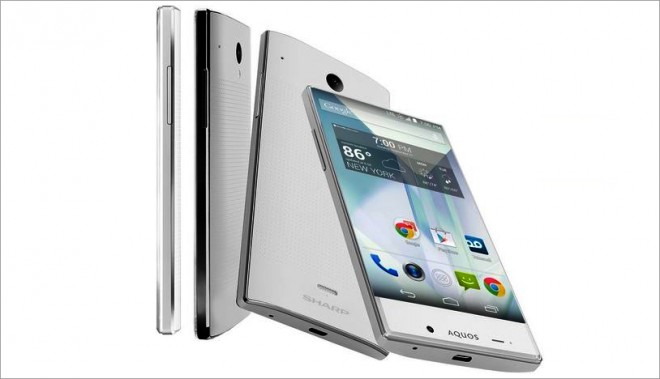 The first Sharp AQUOS Crystal smartphone is coming to the U.S.

The phone comes with a number of unique features including Sharp’s Aquos LCD display. The Sharp AQUOS Crystal may be the first smartphone available in the U.S. with a true edge-to-edge display. That’s a totally flat screen that extends all the way to the phone’s edges.

Sharp is more known for its high-definition televisions. This is the company’s first smartphone product. In an official announcement, Yoshisuke Hasegawa, Executive Managing Officer of Sharp Corporation, explains:

“The already successful AQUOS brand is taking another step forward among U.S. consumers by adding the Crystal smartphone, which marries innovative technology with a vibrant display, as customers have come to expect from Sharp AQUOS products. The AQUOS Crystal offers unique features and leading technologies, all incorporated in a beautiful edge-to-edge design.”

Here is a look at the phone up close:

There may be a slight bezel at the edges of the phone’s edge-to-edge dispplay, according to a review of the device from The Next Web. So it will be interesting to see how this display stacks up to future edge-to-edge screens. But what might truly be important, depending on the user’s needs, is the cost of the phone, some of its features and its visual aesthetics.

First, the Sharp AQUOS Crystal will run Android on a 1.2GHz quad-core processor. The phone is sold with 1.5GB of RAM and 8GB of ROM. As we’ve seen with other budget-friendly smartphones and tablets, that amount of memory is fairly standard. There is an expansion slot to add another 128GB of flash memory, too.

The 5 inch edge to edge display is HD. Another feature unique to the Sharp AQUOS Crystal is what the company calls Clip Now. This is essentially a social sharing app that creates a tiny URL for the image you capture on your screen. That could include any site you’re browsing or images you collect with the 8-megapixel rear-mounted camera. The feature will make it even easier to share and display images online. There’s also a 1.2-megapixel front-facing camera for video chats.

The camera features a Night Catch feature for capturing images in low light.

The phone will sell for about $150 when it is officially released at the retail level in white and black.

This smartphone will only be available on the Sprint network and its subsidiaries. If it’s purchased through a Sprint calling plan, Sprint will charge customers $10 a month for the phone over two years, bumping the cost to $240 over time. The phone is available for outright purchase and can be used on the Virgin Mobile (only available in black) or Boost Mobile (sold in white) pre-paid networks.