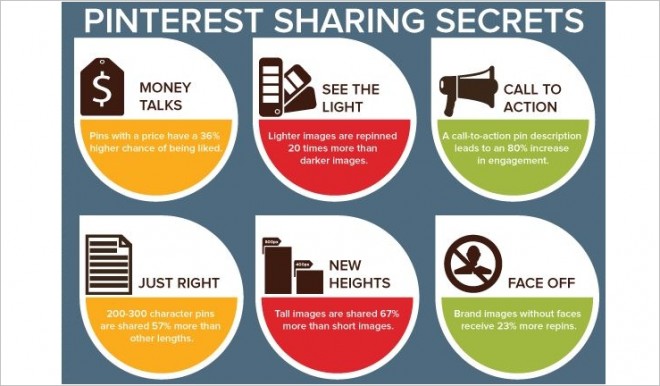 Pinterest can be a powerful marketing tool, particularly for visual brands. But there are some types of images that lead to more engagement, clicks, and purchases than others.

An infographic released by Ripen Ecommerce outlines some of the most successful types of images on the site.

For instance, the infographic suggests that:

The information that goes along with these images can be just as important. For example:

So if you’re an eCommerce company, using this information allows you to potentially choose images that amplify your reach on Pinterest. When you know what types of images customers look for while browsing the social site, you can better tailor your content to those expectations.

Posting taller, lighter images without faces, for example, will probably bring you better engagement and greater reach when seeking to connect with more on Pinterest’s millions of users.

Something as simple as including a price or a call to action can have a dramatic effect on the social engagement you’ll see with your brand or business. So why wouldn’t you use that information to your advantage?

Compared to other social sites like Facebook and Twitter, Pinterest is even more successful at turning followers into buyers, according to the research from Ripen Ecommerce. This is likely due, at least in part, to the highly visual nature of the site. In addition, many of Pinterest’s users are already looking for particular types of items.

Pinterest’s reach continues to increase as well. According to the infographic, more than 22% of Americans use Pinterest at least once per month. Just 12 percent used it that often in 2012.

But as users increase, so does the amount of content on the site – so it’s even more important to make your photos stand out from the rest.

Annie Pilon is a Senior Staff Writer for Small Business Trends, covering entrepreneur profiles, interviews, feature stories, community news and in-depth, expert-based guides. When she’s not writing she can be found exploring all that her home state of Michigan has to offer.
15 Reactions
Subscribe
Follow @smallbiztrends
RSS LinkedIn Pinterest iTunes