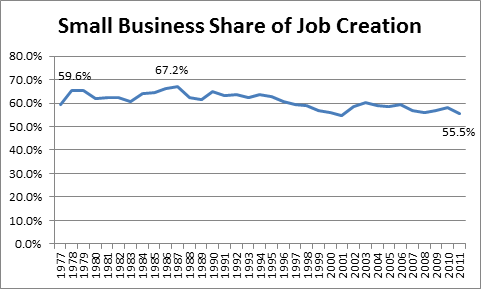 As the figure above shows, companies with fewer than 500 employees generated 55.5 percent of all new jobs created in 2011, the latest year for which data are available. That’s a significant drop from 1987 when small businesses were responsible for 67.2 percent of new job creation.

But even the rise in the share of job creation at larger small businesses has been relatively modest when compared with the increase in job generation at the biggest companies. While businesses with 10,000 or more workers accounted for 16.7 percent of the jobs generated in 1987, they were responsible for 23.9 percent of the positions created in 2011.

Economists are not sure why small businesses are accounting for a smaller fraction of job creation and private sector employment than they used to. Some analysts point to the effects of rising health care costs and regulation, which tend to hit smaller companies more heavily than big businesses. Others focus on changing industry composition, pointing out that the real estate and construction sectors, where small businesses are more prevalent, have shrunk dramatically over the past two decades.

Still others concentrate their attention on the decline in bank lending to small companies, which historically have relied on bank credit as a source of capital. And some economists point out that the decline in small business’s share of job creation is really the result of increased job generation at big companies.

Whatever the explanation, the facts remain: Small business’s shares of both job creation and employment have both been trending downward for the past two-and-a-half decades.