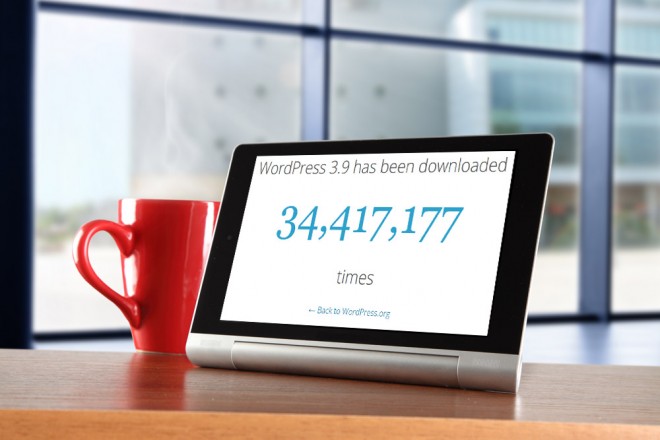 WordPress 4.0 is slated to be released August 27, 2014. A beta version of this new release of the popular content management system is available for testing.

We took it for a spin recently to find out what differences you might encounter as you make the transition to WordPress 4.0 from WordPress 3.9 later this month.

The WordPress platform remains a favorite of online publishers and small businesses. It is the preferred content management system for the majority of the most popular blogs on the Internet.

The current version WordPress 3.9 (or to be technical, 3.9.1), has been downloaded over 34 million times. By comparison, that’s more than the entire population of Australia. If you watch the WordPress download counter you can see in real time just how popular WordPress is.

WordPress is open source software, meaning that it is worked on by the community and is free for users to download and install.  Open source software sometimes can suffer from not being maintained and updated regularly.  WordPress, however, doesn’t have that problem. It is continually improved and updated, and has become a mature and stable product.

This next version of WordPress comes with quite a few changes to the back-end.  I’ll cover a few key ones here. 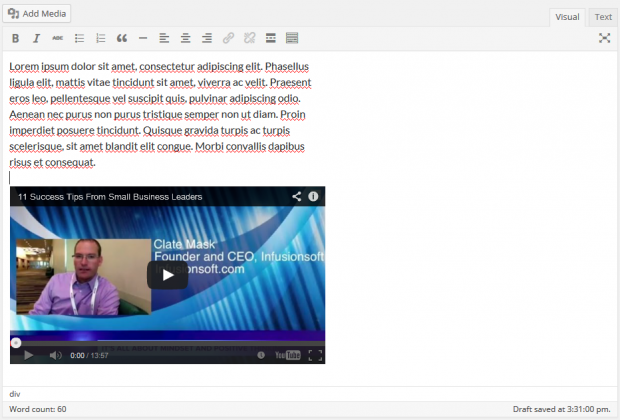 First of these changes is to the editor screen (the screen you use when composing new posts or pages).  A nice change involves the way you view video as you insert it into articles and pages. Videos that can be inserted by simply adding the URL to your page’s HTML code, such as YouTube or WordPress.tv videos, can now be seen in the Visual editor screen.

This allows you to see how a video will look without the need to preview the entire article first. The video itself cannot be played in the Visual editor. But an image of the video player will appear making it easier to see when videos have been properly embedded.

The new editor will also intelligently resize itself to the full height of the article you are editing. This allows the largest possible working area while keeping the editor’s top toolbar and footer in view at all times.

Perhaps more surprising at first, is the fact that the change completely removes the scroll bar in the editor. This change takes a bit of getting used to. But once you get the hang of it, you may find it actually makes writing articles easier.

Next stop is the WordPress Media Library now offering a grid view similar to what you get when you hit the Add Media button in a post. But WordPress also still offers the current list view.

This flexibility is sure to make working with uploaded images on the WordPress platform easier.

The newest version of WordPress has redesigned the plugin area a bit.  On the back end of WordPress, when you click on the menu item to install new Plugins, and search by topic to find a plugin, you now get more information right there.

For instance you can now see the last time a plugin was updated.  You can also see if it was tested with your particular install. This addresses a common issue with plugins, which is that some plugins are not updated regularly.  When plugins are not updated regularly, they may either not work with newer versions of WordPress or pose a security risk.  This feature could save you time when you are searching for a plugin.  You can narrow down your research to plugins that are kept up to date.

Also significant is that when installing WordPress for the first time, users will now be prompted to choose a language. It’s a feature that would seem to make the platform more accessible to publishers around the world.

Overall, we really like the direction that WordPress is taking with the new version. However, it would have been nice to see more of a technological jump after WordPress 3.9.

Despite the changes, the new version of WordPress seems more like a version 3.10 software update than 4.0. (In the world of software version numbers, a jump of a major number, i.e. to the left of the decimal point,  typically is for major functionality changes. Changes to the numbers to the right of the decimal point are for minor functionality changes or fixes of bugs and other issues.) Those of you who have used WordPress for years may remember the jump in functionality when WordPress moved from 2.9 to 3.0. We aren’t seeing the same level of innovation this time around.

The changes are definitely welcome, especially for nontechnical users and content producers. The changes just are not as extensive as expected.

Wondering if you can start using WordPress 4.0 early and get a headstart? Well, it’s not recommended, according to the WordPress.org website. The software is still technically under development and should only be used for testing purposes until its official release. Until then, use 4.0 at your own risk!

WordPress continues to evolve into an impressive and robust content management platform, especially considering that it is free. We are excited to start using WordPress 4.0 on its official release.