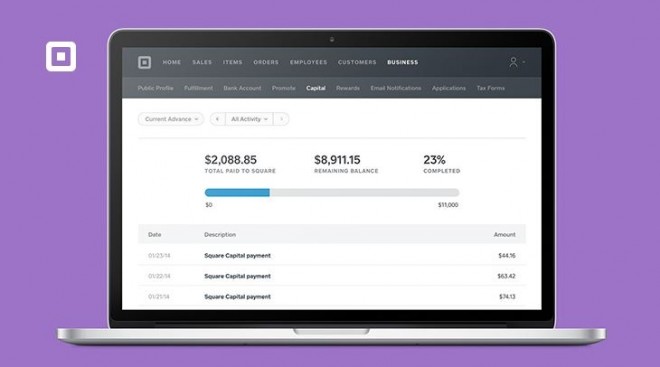 Square is expanding its cash advance service for small businesses. The mobile point of sales provider says new funding will allow it to advance more money to more small businesses soon.  The company announced the news on the official Square Blog this week.

Square says an investment from Victory Park Capital will allow the Square Capital program to include more independent and small businesses.

In a statement this week issued with the announcement on the news page of the official Squarte website, Victory Park Capital managing director Dan Schwartz said:

“We are pleased to be partnering with Square and believe they are uniquely positioned to serve their merchant base with another best in class product.”

Square did not provide details on how large the investment was or how it would expand the program, specifically.

Square Capital was only launched in June. But since then, the company estimates it has given almost $50 million to more than 10,000 small and independent businesses using Square merchant services.

The program allows qualified Square merchants to ask the company for a lump sum cash advance. Square is specific in saying the money is not a loan. Instead, Square charges a fee for the advance based on existing earnings. So this and other similar services – like one offered through PayPal – are options for small businesses that can’t get a bank loan.

When merchants agree to fee, Square places the requested money in their bank account.

Merchants can request a cash advance from Square Capital through their seller’s dashboard. Back in June, the company indicated merchants could request an advance if they processed at least an average of $250,000 in annual sales through Square. It’s unclear whether these limits would be lowered on account of the new investment.

“We’ve been tremendously impressed with Square Capital’s data-driven approach to merchant finance, and we are confident they will achieve substantial growth in a dramatically under-served market.”

Square uses the sales data merchants accrue while using its services to determine the type of offer they might receive.

Upon launching the program this summer, Square gave one possible example of the kind of percentage it might charge for a cash advance. In the scenario, Square explained a business that might take a $10,000 advance might need to pay back an additional 10 percent, a total of $11,000, adding the cost of the advance.

However, in May Square merchant Extreme John shared rates he had been offered in a pilot version of the program. Those rates included:

So, it can be assumed rates vary considerably.

Recently, the company also introduced its Square Appointments service making it easier for customers to book appointments with small businesses like hair salons online. The new service is an indication the company is broadening its offerings beyond its original mobile card reader.