BlackBerry Passport: Wide is the New Black in Smartphones 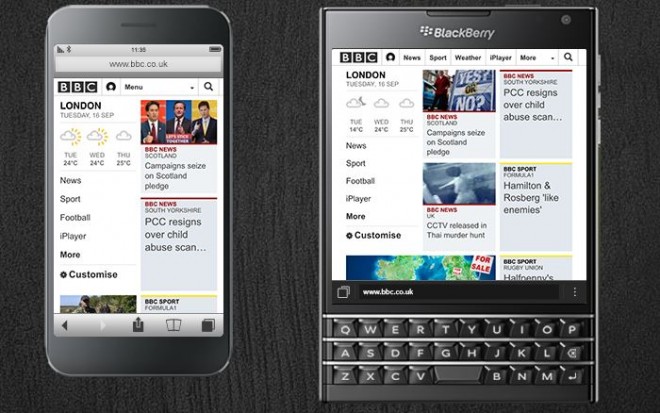 A square display on a smartphone? That’s what BlackBerry is hoping will help attract old and new users alike to its latest entry in the smartphone arena. And for those dedicated BlackBerry users, this smartphone also features a return to an old-school design, a full QWERTY keyboard separate from that square screen.

For starters, the new BlackBerry Passport features a 4.5-inch square display. That’s right, a perfect square for a display. For those of you who’ve felt limited by the width of a traditional smartphone’s display, this feature should make editing documents or images considerably easier. Below the display is that QWERTY keypad, a hallmark of BlackBerry devices.

This video from the company gives a closer look at the device:

BlackBerry’s Donny Halliwell, Social Media Marketing lead, writes about the keyboard on the Passport in the INSIDE BlackBerry blog:

“The touch-enabled physical keyboard on the BlackBerry Passport blends everything I love about a traditional BlackBerry keyboard (read: the physical keys) and the best aspects of the BlackBerry 10 virtual keyboard, including commands such as ‘Swipe left to delete’ and ‘Flick to type’. On top of that, the keyboard provides fine cursor control and scrolling, which for someone like me who composes blog posts, novel-length emails and a ton of BBMs, comes in very handy.”

BlackBerry is pricing the new Passport smartphone slightly lower than comparable higher-end smartphones on the market today. The Passport is available unlocked from either the BlackBerry website or at Amazon.com for $599. BlackBerry has also confirmed that AT&T is signed on to be the mobile carrier.

The new iPhone 6, which was just released last week, starts at $649.

The Blackberry Passport is standard with 32GB of internal storage, which is about 4-times as much as the standard issue iPhone or Samsung Galaxy smartphones.

The BlackBerry device also has a 13-megapixel OIS camera and its battery will last up to 30 hours, according to the company. The camera has a 5x digital zoom, too. The rear-mounted camera also records 1080p HD video at 60 frames-per-second.

The Blackberry Passport has a 2-megapixel fixed-focus front-facing camera, too. It records video in 720p HD, according to BlackBerry.

The display on the Passport is not HD, however. BlackBerry says the device’s screen resolution is 1440 x 1440 pixels.

Blackberry Passport will run the latest BlackBerry mobile operating system, BlackBerry 10, on a Qualcomm Snapdragon 800 processor with 2.2 GHz quad-core CPUs. The device will be loaded with 3GB of RAM memory and 32GB of Flash memory.

The new smartphone from BlackBerry has a USB 2.0 port that is used for charging the phone or syncing data from it to other devices, like a laptop or tablet.

BlackBerry is also introducing BlackBerry Blend, which allows users of the Blackberry Passport device to transfer the work they’re doing on the phone to a tablet or laptop, and vice versa.