If You’re Stuck in a Rut, Read “Coloring Outside the Lines”

A quick and easy-to-read book that will help you uncover what drives you, but more importantly - what's holding you back. 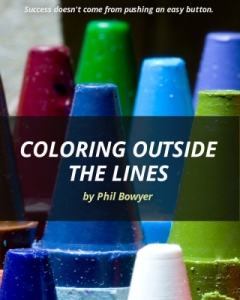 I had finally had it. I clicked on the delete button one by one and within about two minutes I had unsubscribed from nearly 600 email lists. But here’s the interesting part. I didn’t unsubscribe because they were a nuisance or I didn’t get value from them. On the contrary, they were all great sources of information. The real problem was that I realized that I was using them as a distraction. I was looking at each one, analyzing what they were doing and comparing myself with them.

Now, there is certainly a time and a place for that kind of thing. Case studies are a great way to learn and modeling success is a super head start. But when I saw that these things were actually keeping me from moving forward – BOOM! They were gone.

Not long after this moment, I heard about this new book by Phil Bowyer, Coloring Outside the Lines.

Now, let’s be clear. This is not a New York Times Best Seller. I got it as an ebook, because I had heard about it via a bunch of buzz on Google+. I attended a hangout or two where Phil was the guest and when I had the opportunity, asked for a review copy.

Before I get into the book, let me tell you a little about Phil because I think this will really give you an appreciation for where the book comes from and why everyone on Google+ is talking about it.

Phil Bowyer is a former firefighter turned entrepreneur. Now that’s a combination! His story is really engaging. Let me just give you the short version. He was the youngest firefighter in Orange County at the time, at the age of eighteen. He’s also somewhat of a serial entrepreneur, but not the Silicon Valley kind. The kind like you and me. He had ideas; he tried them out; he followed his passions. Sometimes more successfully than others. He got married, had a family and jumped into the Internet world. He succeeded, he failed and now he’s focused on breaking the rules.

So, today, you’ll find Phil Bowyer evangelizing on how entrepreneurs can break rules and succeed. He’s an author, and a marketing consultant to entrepreneurs. I think he’s also done a lot of work with rock bands as well since he’s a self-proclaimed metalhead. Either way, I chose to read and review this book because Phil is “One of Us”.

Coloring Outside the Lines – A How-to Book on Rule Breaking

Now, you really have to meet and see Phil to get an appreciation for this book. Because the thesis of the book is something like:

“If you’re going to be your OWN BOSS, then you need to do it YOUR way!”

Hence, this focus on breaking rules. Because so many entrepreneurs are hung up on following gurus and this kind of thought will send Phil into a ranting jag (so don’t go there).

Do You Have What It Takes To Color Outside The Lines?

This is a short book written in five parts. My recommendation is that you read it from beginning to end. I’d also recommend that you have a journal, notebook or document in your computer where you can work on several of the exercises that will help you get focused on who you are inside of your business and what you are committed to.

Bowyer’s philosophy is that unless you get clear on who you are, your passion, your mission and what you’re up to, you will forever wallow in not being good enough and go looking for advice in all the wrong places – with gurus and systems that worked for others – but might not work for you.

Here’s what you’ll find in the book:

Why I’m Recommending this Book

I could be way off base here. But I meet a lot of you who are reading Forbes, Entrepreneur and books by big authors almost as an aspiration group – you dream of hitting the “entrepreneur lottery”. I get it. I share that with you.

If you aren’t there yet, chances are, it’s the kind of stuff Bowyer covers in this book that’s holding you back. It’s not your marketing strategy, not your pricing, not any of the lofty stuff the celebrity authors are telling you. It’s this kind of daily mundane stuff that gets in your way.

This isn’t just a book you should read as an entrepreneur and small business owner. It’s also a book you can share with recent grads and younger workers (WARNING: There is some language in there that some might find offensive). But it’s raw and real and I think right on the money.

Coloring Outside the Lines may never be a New York Times best seller. But it can be the kind of book you turn to when you need a kick-in-the-pants or a whack-on-the-side-of-the-head that gets you moving your business to success.