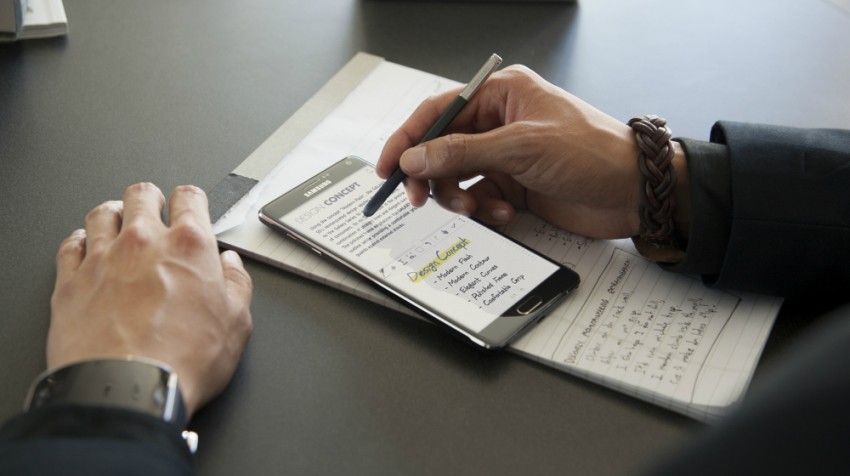 Online and device security are among the biggest concerns of smartphone and tablet users these days. And those concerns are at least part of the reason Samsung has included Synaptics’ Natural ID fingerprint scanning technology in the new Galaxy Note 4 phablet.

It has a 16MP rear-facing camera along with a 3.7MP front-facing camera. The large screen allows users to work with the phablet’s Multi Window feature. Multi Window allows two apps to be running simultaneously on the same screen.

Samsung is also touting improved functionality for its S-Pen device. This includes improved handwriting features and more functions that use the S-Pen when working with the device.

In an official statement issued with the release of the new device, JK Shin, CEO and head of IT and mobile communication at Samsung Electronics, explained:

“With the introduction of the Galaxy Note series, we brought the age-old culture of the pen and notepad into the digital world. The new Galaxy Note 4 introduces the most refined Note experience to-date by combining all the latest technology that users expect from the Galaxy series.”

The fingerprint scanner included with the Galaxy Note 4 will actually be split into two parts. One part will be included on the Home button of the device and the other half will be within the screen. The phablet will read the fingerprints it scans from both surfaces before unlocking the device and allowing a user to access other functions.

The Galaxy Note 4 fingerprint identification technology will enable several different features on the phablet. SamMobile.com reports that the Note 4 will have Screen Lock, Private Mode, Samsung Account Verification, and PayPal Payments linked with the fingerprint technology. These features have already been included on the Galaxy S5 smartphone.

Synaptics says that its Natural ID technology is online transaction ready. According to the company’s website:

“Natural ID sensors are compliant with FIDO, the industry-standard for online transactions. FIDO-compliant websites and web apps seamlessly interact with the fingerprint sensor to replace cumbersome and hard-to-remember passwords.”

New to the Note 4 is a feature called Fingerprint Shortcuts. SamMobile.com reports the feature will allow users to access different apps and shortcuts on their Note 4. For example, you can securely log in instantly to your favorite websites once you’ve initially manually entered your information so long as you’ve used the Galaxy Note 4 fingerprint ID to access the device first.