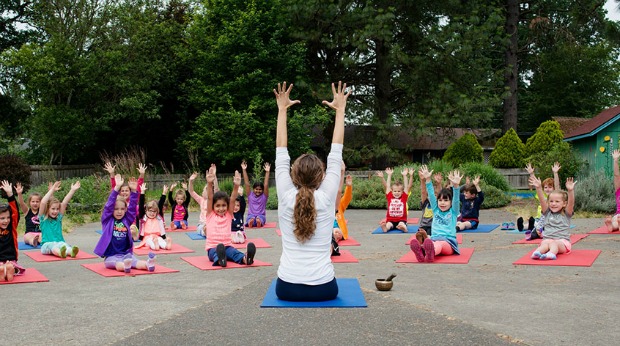 Jamie Dix has a background as both an early-childhood educator and a yoga instructor. So in 2009, she decided to combine those two passions and create a yoga program for kids that would provide both a physical and mental workout.

Imagination Yoga isn’t your average yoga studio. And the difference goes beyond the fact that the client base is made up of kids. The program also approaches the teaching of yoga in a whole new way. Dix’s approach makes use of storytelling techniques to move the yoga sequences along. Kids ages 2 through 12 act out adventure stories set in castles, outer space, farms, and other locations.

“When people think of adult yoga, they think of quiet and calm and perfect poses. But we’re never asking the children to sit still. So much of school right now is, ‘You must sit still and listen to what I have to say.’ But what we’re saying is, ‘I want you to move your body, I want you to roar like a lion, I want you to be silly and crazy and loud with me.’ And because we’re having fun with them, we get their attention, and it creates a platform for having these conversations that are so desperately needed.”

The model worked so well that others became interested in using the same techniques to get kids interested in yoga. So Dix enlisted the help of her siblings, McClintic and Jon Hopkins, to turn Imagination Yoga into a franchise program.

But just as Dix’s approach to teaching yoga is unconventional, so is her franchise model. At first, the Portland based business offered a simple licensing program for people who just wanted to learn to teach the company’s own unique approach to yoga. Then in 2012 it switched over to a full franchise program for people who wanted to make storytelling yoga a full-time business.

Now, Imagination Yoga offers both options. So both people who want to run their own yoga studio based on Imagination Yoga’s approach and those who just want to learn the teaching techniques can benefit.

So, in a way Dix’s franchising model follows the same pattern as her teaching method. Just as Imagination Yoga’s approach combines two ideas, storytelling and yoga, to reach a new audience, so her franchise model gives two options to appeal to more potential small business owners out there.

Either way, the company’s goal to teach children important lessons ranging from creativity to kindness remains its central focus.

Read more: The most profitable franchise in the U.S.