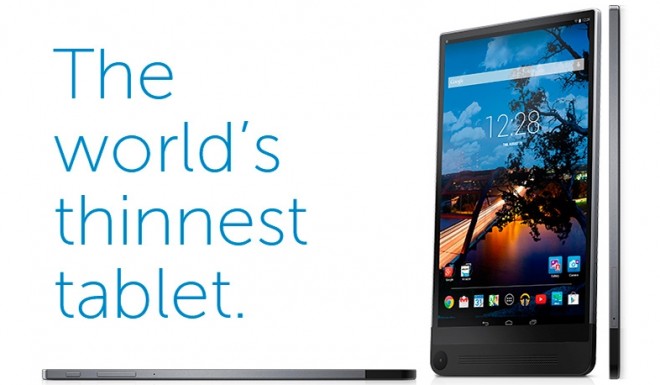 No, what’s really impressive about the tablet is the Intel RealSense Snapshot Depth Camera. The rear mounted camera features 3D filters that allow users to measure depth and distance from a photograph. That essentially means it can take 3D photos.

“You can use this function to map out the floor plan for your new apartment, purchase furniture for a renovated living room, or commemorate your highest ascent at the local rock climbing gym. There are a number of artistic benefits as well. People will have much more power and flexibility with editing photos by applying 3D filters, such as changing the brightness only on a foreground object or background object.”

The 3D camera is actually three cameras in one with a main camera on the rear of the device mounted just above two smaller cameras that together enable the overall 3D effect. In addition, the camera’s Gallery app makes it possible not only to enhance the camera’s 3D features but also to adjust color, tone and to manipulate various layers of your photos.  cNet reports:

“There’s a slight learning curve to using all of the customization options, however, their robust offerings are simplified actions of what one can accomplish in Photoshop — a tremendous feat for a tablet.”

Dell also touts the 8.4-inch OLED display on the new Dell Venue 8 7000 Series tablet. The screen resolution boasts 2560 x 1600 pixels. The tablet also has other features which should allow it to be easily integrated into various aspects of your business workflow.

The new Dell Venue 8 also can be accessorized with the Dell Cast adapter. This allows users to project their tablet’s screen to a desktop or laptop computer or a TV. If these devices are connected to a keyboard and mouse, the tablet can be operated like a regular computer.

The device is expected to go on sale in November with pricing still to be announced.