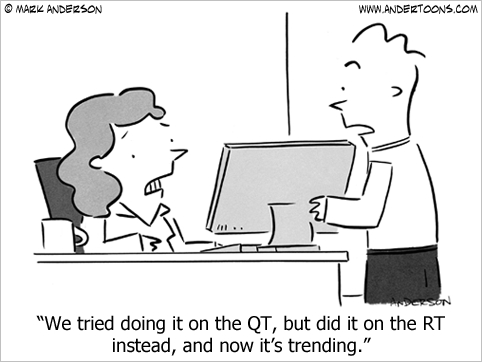 Sometimes there’s a joke that’s been sitting right in front of you for what seems like forever.

Take this cartoon. I’ve been tweeting long enough to remember when “RT” was how you noted that this was something from someone else that you were sharing. (I also remember when hashtags first started. I’m feeling old.)

Anyway, one day when someone mentioned to me that they needed something kept “on the QT,” a phrase I hadn’t heard in a while, I began playing with the alphabet and realized RT was right next door…and this cartoon popped up.

It was right there in front of me every time someone retweeted me and it still took a few years to sink in.

On one hand that’s reassuring in that there’s always something out there to play with. On the other hand, it’s a disturbing reminder of just how much goes right over my head.