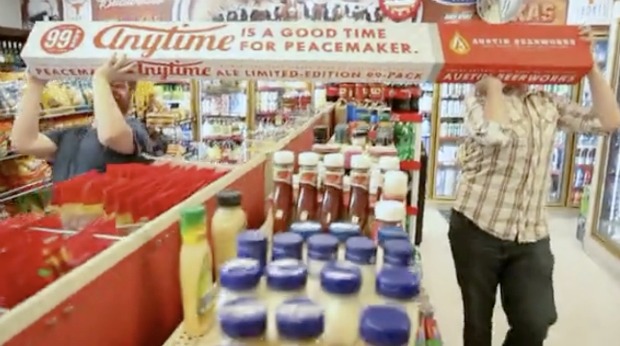 You’ve likely heard the song “99 Bottles of Beer on the Wall.” But did you know you could actually buy a case of 99 beers in Texas?

Local Austin brewery Austin Beerworks sold the 99-packs of its award winning Peacemaker Anytime Ale at select stores throughout Austin recently. The company sold out all 20 of the 82-pound, 7-foot-long cases within the first day the first day they were offered, but plans to release more soon.

The stunt started out as just a lighthearted joke. The brewery wanted a way to promote the re-branding of its Anytime Ale. Since the Anytime Ale is intended to be a beer for every occasion, the idea behind the 99-pack is that it gives buyers a beer for every potential occasion in just one case. So eventually, the joke stopped being a joke. And the 99-pack became a real offering.

Customers interested in getting their hands on a mega case of Peacemaker Anytime Ale followed along with the brewery through its social media accounts to find out which Austin stores would have the cases. Some customers even got a little upset that they weren’t able to snag their own on the first day of the promotion.

The company posted a statement to its Facebook page after the sellout day, saying:

“Today was a crazy day. Sounds like most of y’all had a good time. Thanks for stalking us from place to place and being nice to us. For those of y’all that didn’t have a good time, we’re really sorry. We knew there was no way to get 99-packs to everyone who wanted one, but we could have done a few things better.”

More specifically, the brewery said it should have been more clear about which accounts people should follow to get updates about the promotion. But the company still plans to offer more of the cases very soon, so even more customers should get a shot at buying their own.

A case of 99 beers doesn’t seem like a super practical promotion. But the unusual nature of the campaign certainly seems to have grabbed a lot of attention. And the more people who learn about the brewery, the more who are likely to try their beer, even if they don’t have the space or ability to transport a 99-pack.

In addition, by offering a limited number of packs and posting the store locations on social media, the company was able to promote its social media accounts and build a following that could last well beyond this promotion.