Would You Buy a Vegetable Garden That’s Fertilized by Fish Poo? 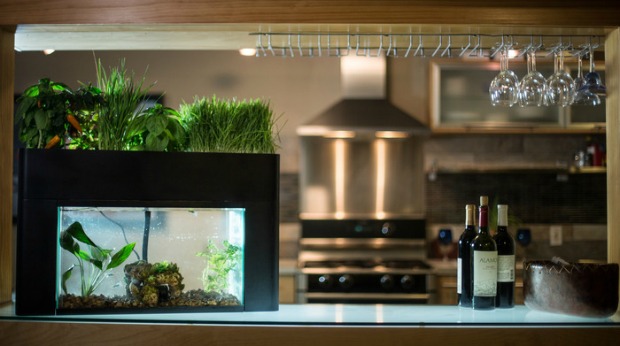 Gardens come in all shapes and sizes. But have you ever considered having a garden that’s actually part of a fish tank? It might seem like an unconventional idea. But it’s actually an eco-friendly system that cuts down on the maintenance you have to do for both the plants and the fish. And now, thanks to startup AquaSprouts, you can buy all that you need for a fish tank garden in one simple kit.

The AquaSprouts Aquaponic Garden has a pump at the bottom that takes the fish waste and converts it into nutrients for the plants. The pump works on a timer, so on top of feeding the plants, it also cleans the water for the fish.

Of course, some people might not like the idea of having their vegetable garden fertilized by waste from their goldfish. But as AquaSprouts CEO Jack Ikard explains to The Huffington Post, it’s not really that different from other types of gardens:

“That’s just the way the world works. If it’s not waste from your fish it’s some other kind of poop.”

Aquaponics has been around for years. But this specific system is different because of a sleek design that’s pretty user friendly, according to those promoting it. In fact, it even comes with seeds for tomatoes, lettuce, kale, mint, basil and wheatgrass, if you so choose. But you could also elect to use your own sprouted starter plants, or even plant flowers instead of edible plants.

Currently, the AquaSprouts Aquarium Aquaponic Garden Kickstarter campaign has collected more than $50,000 of its $60,000 goal with a little under a month left to go.

Ikard says he would like to start selling the aquaponic fish tank gardens in January 2015 if the funding campaign is successful. So far, it looks like that will probably happen. But after that, will people be interested in buying them?

It may be a natural process and not actually any ickier than other types of garden fertilizer. But the question is whether consumers at large will be comfortable with a garden that’s fertilized by their fish.