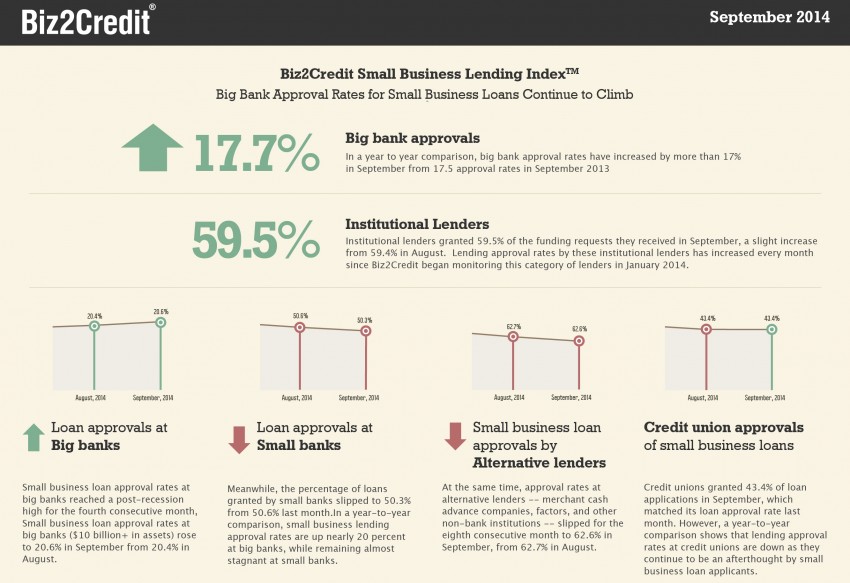 Small business loans at big banks saw a 20 percent increase over this time in 2013. That’s according to the September 2014 Biz2Credit Small Business Lending Index, a monthly survey of 1,000 loan applications on Biz2Credit.com.

Small businesses are increasingly seeking out larger banks (those with 10 billion in assets or more).

“Big banks really have roared back into the small business finance marketplace. As the economy continues its slow but steady rebound, small business optimism grows, and entrepreneurs are more willing to invest in their companies.”

Small business loan approvals from these larger banks saw an increase from 20.4 percent in August to 20.6 percent in September. But not all lenders saw the same increase despite small business owners’ apparent interest in reinvesting in their companies.

For example, credit unions and non-bank lenders, like merchant cash advance companies, have seen a decline in interest from loan seekers in recent months. One of the reasons for that among non-bank lenders may certainly be less favorable rates.

Though loan approvals at credit unions remains steady in September at 43.4 percent, a year-to-year analysis shows fewer small businesses are now seeking them out.

On the other hand, institutional lenders saw an increase along with big banks and granted 59.5 percent of the funding requests they received in September. Biz2Credit reports the category has seen an increase in lending for every consecutive month since it was added to the index in January 2014.

“We are seeing more creditworthy applicants get funding from institutional investors, whose interest rates are more attractive than those of other non-bank lenders.”

Small banks, popular early on with small businesses as the economy was picking up steam, have seen stagnant rates in recent months. The index showed loan approvals at these banks slipped from 50.6 percent in August to 50.3 percent in September. But a year-over-year comparison shows the percentage of loan approvals has stayed about the same.

Founded in 2007, Biz2Credit has facilitated more than $1.2 billion in small business funding through a website that links loan seekers to lenders based on each company’s unique profile.