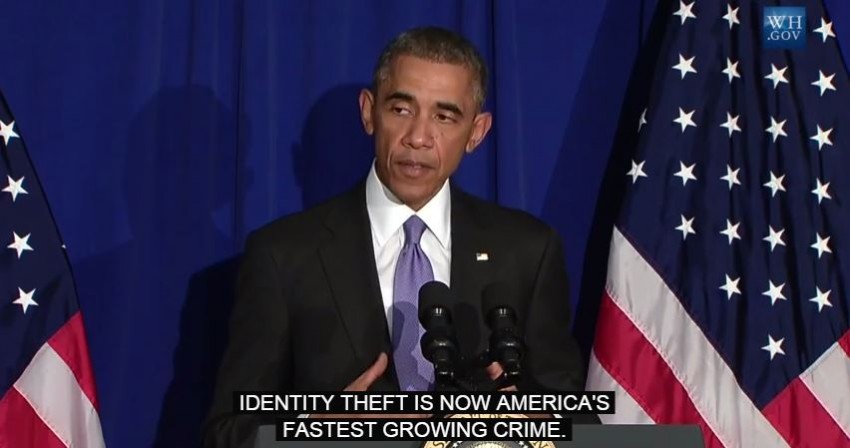 The initiative is designed to reduce identity theft.

And there’s important news of interest to small business merchants. The initiative is intended to accelerate the move to EMV chip-based credit cards and charge cards.

Speaking at the Consumer Financial Protection Bureau this morning, President Obama noted that more than 100 million Americans have had information compromised.

The President described EMV credit card technology as being harder to crack. It has two layers of protection consisting of:

“A microchip in the card that is harder for thieves to clone than a magnetic strip. And a PIN number that you enter into the reader just as you do at an ATM.”

When Great Britain switched to chip-and-PIN cards (as EMV technology is also called) fraud at stores was cut by 70 percent. “You should be able to buy the things that you need without risking your identity, your credit score or your savings,” the President said.

He went on to emphasize that “the private sector is already deeply engaged” in the move toward EMV technology.

Small businesses will get a $100 reimbursement if they purchase EMV terminals that accept secure chip-based cards.

To qualify, small business merchants must accept American Express cards, but have less than $3 million in annual American Express charge volume. You can use the processor or terminal provider of your choice to obtain an EMV-ready terminal. Between February 2015 and April 30, 2015 you go to the American Express site to submit your reimbursement request.

The reimbursement pool is $10 million. Franchisees, however, are not eligible.

Why Should Small Businesses Care About EMV Technology?

EMV technology has actually been around for years. It is used widely in Europe and other parts of the world. But the United States has lagged behind.

Small businesses are not being required by law to move to EMV technology for card readers. But everyone from the President to the credit card processors is trying to persuade you to move. The President is doing it by educating the public on the benefits of chip-and-PIN cards.

American Express is giving financial incentives. And Visa and MasterCard earlier announced that merchants who switch to EMV readers would have more protection in the event of fraud, than if they don’t switch.

Here are resources for small businesses about the EMV program and what you need to know about accepting EMV cards in your business: