Whether you’re a Twitter superstar or just want to be one, Twitter plugins for WordPress can take your results to a higher level. From plugins that add “Tweet This” functionality to widgets that display your Twitter timeline, you’ll find oodles of social boosting features in the list below. Best of all, they’re free!

About the only type of plugin you won’t find in this list are simple social sharing buttons. If you’re interested in those as well, head over and read our post on the top 10 social media plugins for WordPress.

Important Information Before We Begin

To use many of the plugins below, you need to head on over to Twitter and create four security keys. These keys help Twitter, and you, assure that it’s you and only you who has access to your tweets and other Twitter information.

To speed you on your way, we’ve included a quick step-by-step tutorial on obtaining your Twitter security keys at the end of this article.

Twitter WordPress Plugins that Show Your Tweets and More

Using the WP Twitter Feeds plugin is about as straightforward as it gets. Simply drag the widget where you want it, fill out the widget form and your done. Your Twitter feed is displayed on your website. As you can see in the image below, there are two design options, light and dark.

Along with some others in the list, this Twitter plugin for WordPress displays “Twitter Intents”, the links at the bottom of each tweet that enable others to reply, retweet or favorite your tweets. This feature encourages engagement and that’s a good thing. 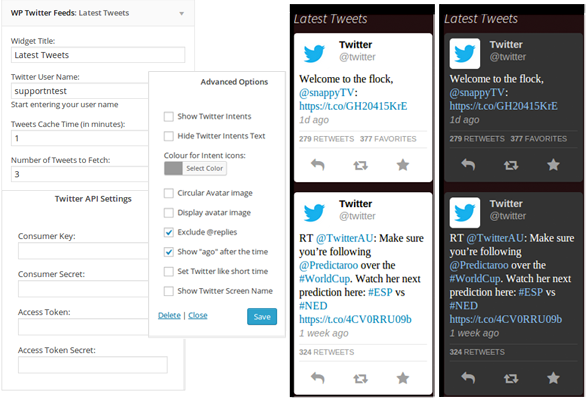 Another straightforward Twitter plugin, Really Simple Twitter Feed Widget includes a shortcode feature that enables you to embed the widget anywhere on your website including posts and pages.

The Twitter Widget with Twitter Reach plugin adds another level to what we’ve listed so far. Not only can you show your own tweets, you can also use search terms to define which tweets can be displayed. Even better, as you can see in the image below, the plugin also displays the reach of your account handle as well as any hashtags or keywords you use in your search. 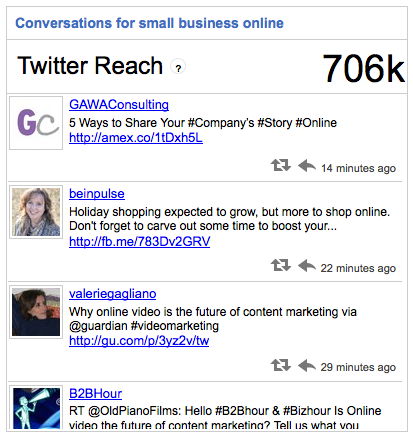 The Rotating Tweets plugin is exactly that, a plugin that shows your tweets one at a time on a rotating basis. As you can see in the image below, there are lots of configuration options. You can even decide whether to display just tweets or include favorites, lists or search results. You can even choose the type of rotation (“scroll up” etc) used when displaying your tweets. 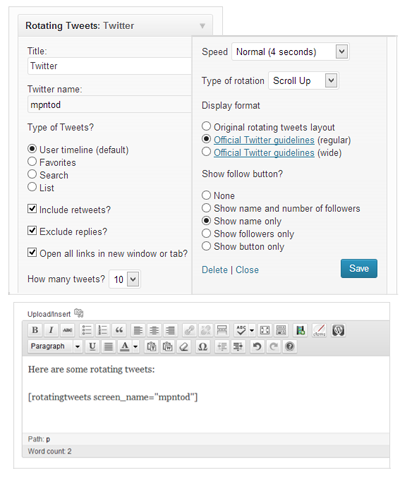 We conclude the section on tweet display widgets with Twitter’s very own widget creator. As you can see in the example below, this versatile tool enables you to create five different types of widgets to use on your website, each showing a different type of information.

Though this is not really a plugin per se, once you configure and create your widget, all you need to do is copy and paste the resulting widget code into a WordPress “Text” widget and you’re ready to go.

The Twitter Auto Publish plugin saves time by automatically tweeting an update when you publish a post on your WordPress website. The plugin includes features that allow you to set what’s included in each Tweet (e.g. text and images) and to filter which posts are tweeted by category and custom post type.

Revive Old Post is a handy plugin, especially for a business that has built up a large archive of content on its blog. As shown in the image below, the plugin tweets your posts with a set delay between each tweet. Throw in the ability to filter by category or post and this plugin is a great way to maximize your investment on post creation and build your following on Twitter.

Free WordPress Plugins that Help You Control the Message

As you can see in the image below, the Click to Tweet plugin enables you to create a handy quote box with a link that visitors can use to easily tweet the quote shown to all of their followers. You can even add multiple click-to-tweet boxes to any WordPress post or page.

The benefits here are powerful. Not only are you providing website visitors with a way to easily share your content, you’re also pre-loading their tweets with your own targeted content, greatly increasing the likelihood that the right message will be conveyed on Twitter. 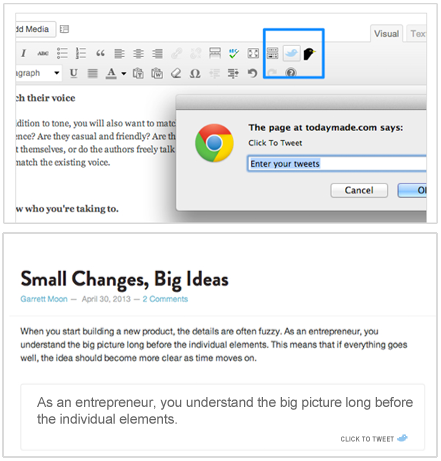 Free WordPress Plugins that Help You Use Twitter Cards

Twitter cards are content-rich tweets that go beyond 140 characters to include images, links, videos and product information. The image below shows the seven types of Twitter cards available. 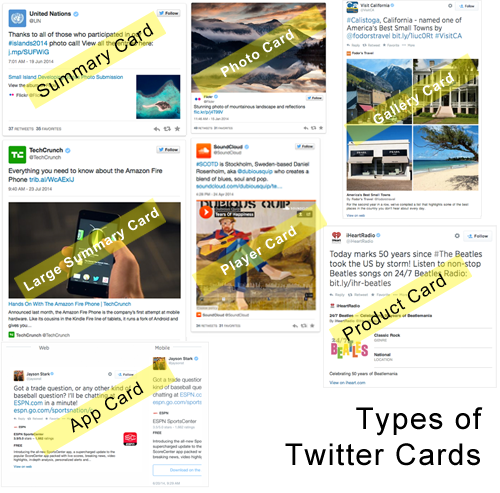 Using a new metadata area added to both post and page admin screens, you can set the type card used for each individual entry, a handy feature when you want to highlight products or multimedia content. 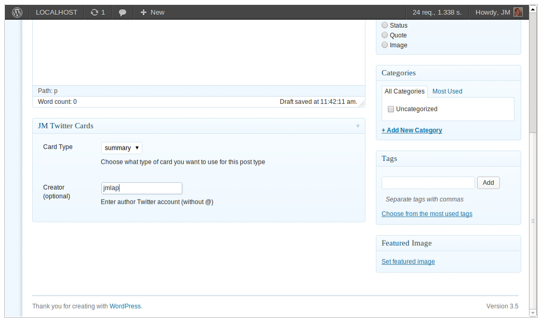 As we explained earlier, to make use of most of these plugins, you’re need to create four security keys with Twitter. Here’s what you do: 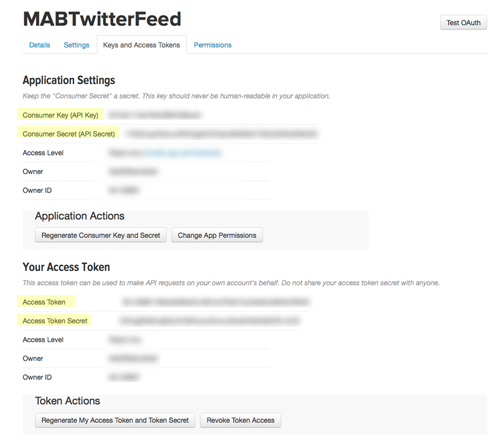 Matt Mansfield is the Tech Editor and SEO Specialist at Small Business Trends where he is responsible for directing and writing many of the site’s product reviews, technology how-to’s, and lists of small business resources as well as increasing the reach of our content.
13 Reactions
Leave a Reply Cancel reply
Subscribe
Follow @smallbiztrends
RSS LinkedIn Pinterest iTunes