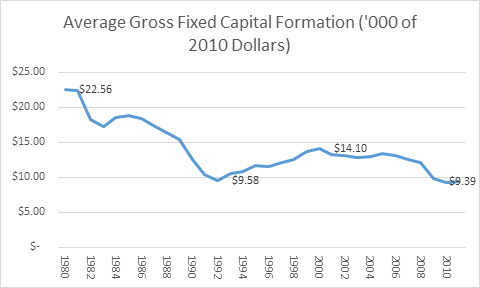 Capital investment activity at non-corporate businesses has been declining for the past decade, data from the Federal Reserve’s Flow of Funds report shows. Between 2000 and 2011, the latest year data are available, the average non-corporate non-financial business reduced its gross fixed capital formation by one-third, when measured in inflation-adjusted terms.

This decline is troubling. Investment in machines, office equipment, vehicles, software, and other fixed assets helps companies to boost their productive capacity. A lower average level of investment means that businesses are investing less in plant and equipment than they used to.

Gross fixed capital formation measures the change in the value of fixed assets – nonresidential equipment, structures, software, research and development and entertainment, literary and artistic originals – before adjustment for consumption or depreciation of the assets. While the measure isn’t the same as total investment – it excludes money put into financial assets and land, as well as additions to inventories and other non-fixed assets – gross fixed capital formation does capture the willingness of businesses to purchase capital goods that are used for productive purposes.

The figure above plots the inflation-adjusted average amount of gross fixed capital formation for non-farm partnerships and sole proprietorships from 1980 to 2010, measured in inflation-adjusted dollars. Two patterns emerge clearly from the data. First, the average amount that non-corporate, non-financial businesses invested in fixed assets trended upward from 1992 to 2000, and then reversed course between 2000 and 2011, with the most precipitous decline occurring during the Great Recession.

In short, small businesses are not investing in capital assets to the extent that they once did. That’s not a positive sign for the future productive capacity of the small business sector.

Image: Created from data from the Federal Reserve Flow of Funds report.