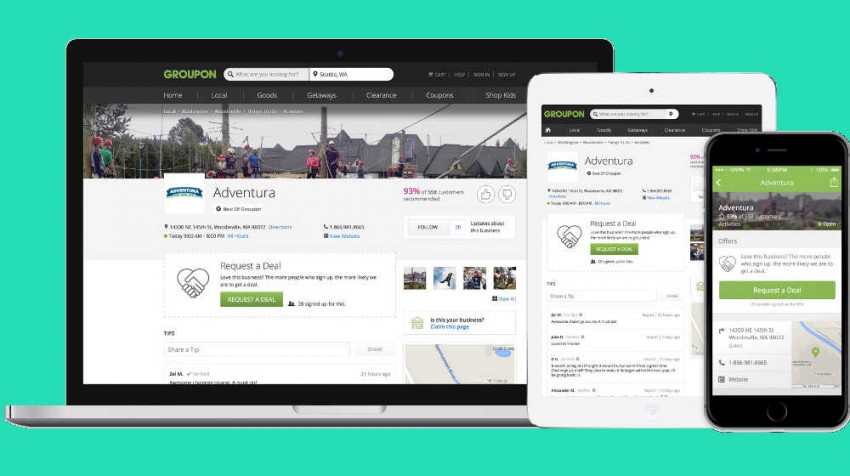 Groupon seems to be taking a page from the Yelp playbook introducing Groupon Pages. The new feature is another effort by the company to move away from its online coupon origins by providing more comprehensive services to small businesses.

New Groupon Pages do bear a superficial resemblance to online review site Yelp with basic information on location, hours of operation and how to get in touch. There is also a “tips” section similar to Yelp’s “reviews” and then a place for customers to “recommend” the business.

Groupon says it wants businesses to use new Groupon Pages to publish specials, communicate with customers and gather feedback. By contrast, Groupon says it hopes customers will use the new feature to connect with, follow and recommend businesses.

Other features include an opportunity for customers to “request a deal” — the only harkening on Groupon Pages to the company’s core online coupon business.

There is also an opportunity to become a “Verified” Groupon customer which the company says qualifies certain reviewers to give “feedback about a business such as the perfect wine pairing, the most delicious appetizers or best night to hear live music.”

The feature may be one of several areas where Groupon Pages will differentiate themselves from Yelp despite the similarities.

“Pages brings millions of additional businesses to the Groupon marketplace and connects them with our large community of mobile users looking for things to do, see or buy. We’re giving these merchants their own space on Groupon and new tools to highlight their business and bring new customers through their doors.”

Despite inescapable similarities, there are ways the Groupon Pages section does differ from Yelp review pages.

First, and most obvious is the “Request a Deal” feature calling immediately to mind Groupon’s original online coupon business model. Despite its attempts to diversify with a wider range of business services, the feature demonstrates again that online coupons remain a central part of the company’s offerings.

The “Request a Deal” feature is prominently displayed on all new Groupon business Pages. Customers are asked to sign up encouraging businesses to offer Groupon deals on their products or services.

Second, Groupon Pages seem more intent upon cross promotion of various business entries based on location. With prominent “Explore Nearby,” “Nearby Places” and “Related Reads” sections, the site is clearly encouraging discovery of other local businesses. And it’s conceivable small businesses might eventually be able to use some of these features to cooperate locally on marketing.

Third, as noted earlier, the site’s “Verified Groupon Customers” feature seems a clear effort to address one of the core problems with online reviews at present. That is the possibility of fraudulent feedback.

In 2013, a study  found up to 16 percent of Yelp reviews might be fake. It’s easy to see how Groupon’s verified customer program could be developed to establish greater credibility for online reviews.

Moving Away From Online Coupons

Groupon Pages is yet another chapter in the online coupon giant’s on going attempt to reinvent itself. When the company first started making noise with its online deals, all was good. Small businesses seemed to see nothing but positives in a site that could seemingly bring droves of customers through the door.

But it didn’t take long for the small business attitude toward Groupon to sour. While online coupons brought foot traffic, they also brought problems.

First, many small businesses found it hard to gauge the response and were overwhelmed when it came. Second, the assumption that customers brought in by deals would keep coming back and spend more money was debatable. In the end, the company began to branch out finding other services it could offer small businesses in the process.

In 2012, Groupon acquired Breadcrumb, an app allowing restaurants, bars and other local businesses to replace their traditional cash register with a mobile point of sale system running on an iPad.

In 2013, Groupon expanded the Breadcrumb point of sale system including an electronic credit card processing service with its own special “swipe” attachment for the iPad.

Earlier in 2014, Groupon replaced the free Breadcrumb with Gnome, a $10 per month enhanced service going beyond the features of the original and including hardware which previously had to be purchased separately.

Groupon says it is already planning an enhanced premium version of Groupon Pages to integrate with Gnome. The premium service would allow businesses to use Gnome for deal promotion, customer engagement and even marketing analytics through the Groupon Pages site.

There is also talk of integrating third-party reservation, scheduling and online ordering services in the near future.

Shawn Hessinger is the Executive Editor for Small Business Trends. A professional journalist with more than a decade of experience in the traditional newspaper business, he has another 10 years of experience in digital media for trade publications and news sites. Shawn has served as a beat reporter, columnist, editorial writer, bureau chief and eventually managing editor with responsibility for nine weekly newspapers, the Berks Mont Newspapers. He is also a member of the Society of Professional Journalists.
One Reaction
Leave a Reply Cancel reply
Subscribe
Follow @smallbiztrends
RSS LinkedIn Pinterest iTunes