See What Happened at the Small Business Influencer Awards and Summit 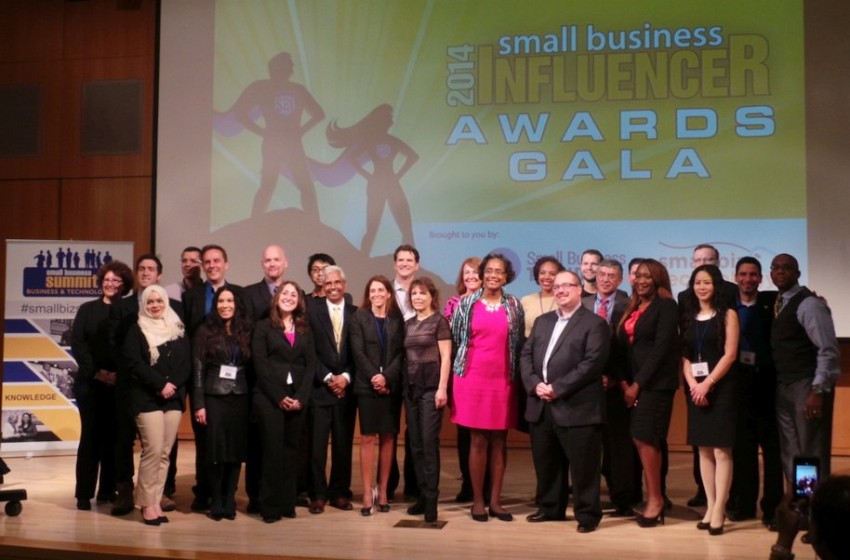 The two events were held at CUNY Graduate Center just down the street from the Empire State Building in Manhattan.

The Summit each year is an educational event and this year had some of the most inspiring and interesting content we can remember in a long time!

One highlight was the keynote by Brian Smith, founder of Ugg Australia and makers of the famous Ugg boots.

Ugg Australia was founded in California although Smith is an Australian native. According to Smith, his company almost crashed and burned several times through lack of capital and other tribulations. At one point he lost control of his company — but eventually regained control.  It was a roller coaster ride over many years before he “hit it big.”

It sounds similar to what small business owners go through, growing their own businesses.

He spoke about how a USA Today story showing actress Pamela Anderson wearing the boots at the beach in her trademark red bathing suit put them on the map. 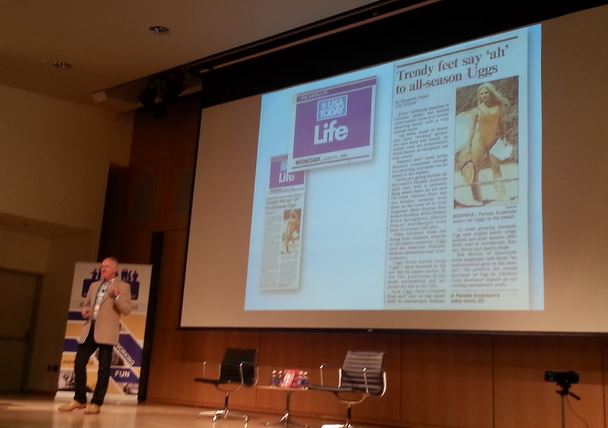 And then there was Sarah Endline, CEO of chocolate company SweetRiot.

Persistence and not taking “no” for an answer is crucial in a startup, Endline said.  One of her best lines was to be relentless and politely persistent. “Some call it stalking,” she said, drawing laughter from the crowd.

Endline, who is deeply and passionately involved in her business, spoke about the importance of visiting the cocoa growers who produce the fruit that is at the “soul” of chocolate candy. 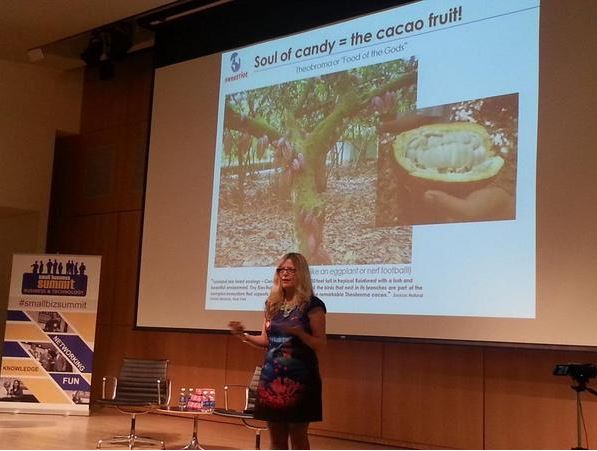 David Newman, author of “Do It Marketing” the Amazon bestseller, gave a great talk about what it takes to market successfully today.

“Spray and pray is dead,” he said. Newman talked about how marketing messages need to be targeted not broadcast; tailored not the same; helpful not pesky. 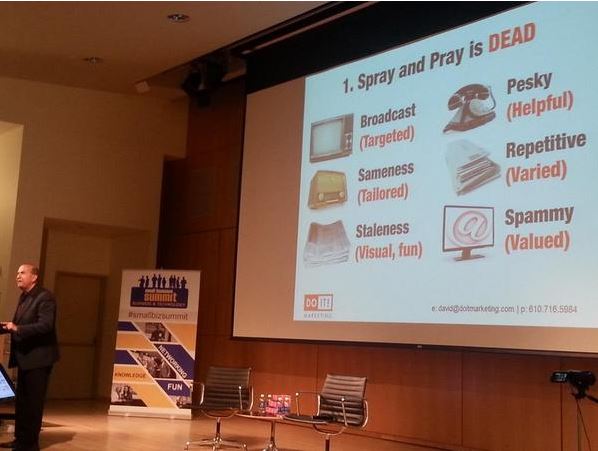 Then there was the “battle” pitting two gigantic competitors against one another.  Google vs. Microsoft featured Michael Spadaro of Profound Cloud, a Google Apps Partner, and Melanie Gass of MicrosoftPrincess, a Microsoft partner. The session was a bold gutsy move.  It was fun, but also included some real jabs especially about privacy. The two differed on several subjects. At one point the Microsoft representative touted how Microsoft supported a Massachusetts bill against using data collected from kids on computers at public schools.  One attendee, Alex Yong, pointed out that more events and speakers “need to take risks” like this session because it was so memorable. 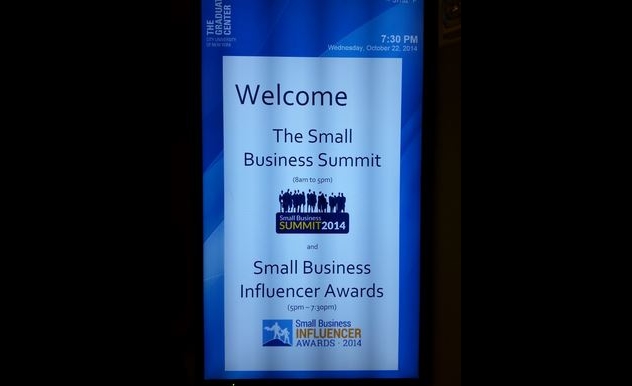 At the Awards gala,Top 100 Champions came from across the country to be honored in the Big Apple. Included were entrepreneurs and small business owners as well as representatives from big names in the small business industry such as Cisco Small Business, Hiscox Insurance, Sage, VistaPrint, Constant Contact, and the Dell Entrepreneur Center.

Top 100 Champion Tiffany Gillespie, who runs an events planning and catering business, came to accept her award with a special guest — her mom!  Mom got a rousing ovation — and the evident pride pointed out how significant this event is to the winners. 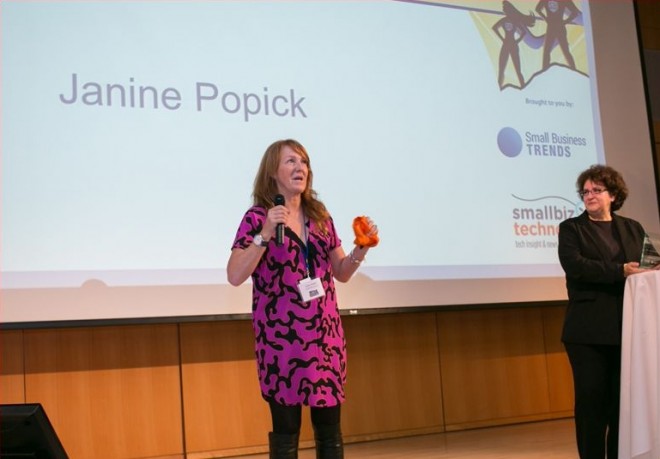 Matt Mansfield, President of Matt About Business and an Honorable Mention, who attended his first event this year explains, “I had a blast. I met so many people who, like me, are passionate about helping small businesses. I loved hearing about their takes on the problems they solve for small businesses – it was a real eye-opener and learning experience.”

Ivana Taylor, Marketing Leader for the Awards said one of the highlights was honoree Carol Wei, founder and president of the Mid-America Asian Culture Association. Wei spoke of the importance of women in the sciences — to considerable applause. 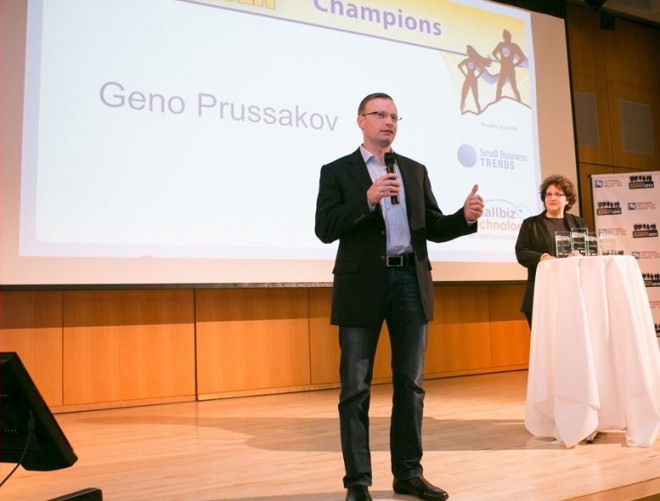 Geno Prussakov, Founder and Chair of Affiliate Management Days, another Top 100 Champion, told a moving story from his childhood in Moldavia, which he called “one of the poorest countries in Europe.” Prussakov, an immigrant to the United States, remembered a story told by his father and likened it to how small business owners operate with dogs barking at their heels all the time.

The event was more than just about handing out Awards. It was a recognition of the hard work and contributions of small business owners, solo entrepreneurs, vendors, journalists and other influencers on the small business community.

See the full list of Top 100 Champions winners and the Community Choice honorees. See also the press release about the Awards.