A Jack O’ Melon? Sigh…Back to Square One 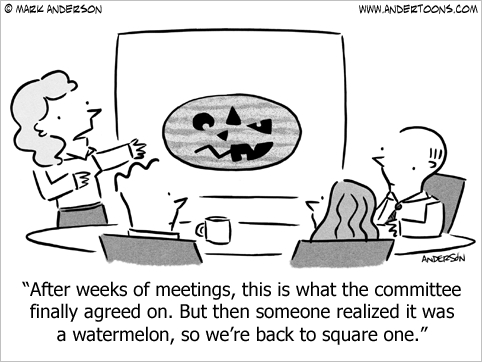 I remember in one of my pre-cartooning jobs there was talk of creating a company website (this was a while ago). A committee was formed and I was a part of it.

Now, I love websites and the Internet. And I thought I had some good ideas on how to move forward. A lot of other people did too and we hashed it out over a few months.

As time went on, however, the website became a mishmash of competing and non-complimentary ideas – and ended up being pretty much a total mess.

So when I thought about a committee being formed to carve the company jack o’ lantern, this idea came pretty much fully formed.