Little Baby’s Ice Cream Shop Prides Itself on Being Creepy 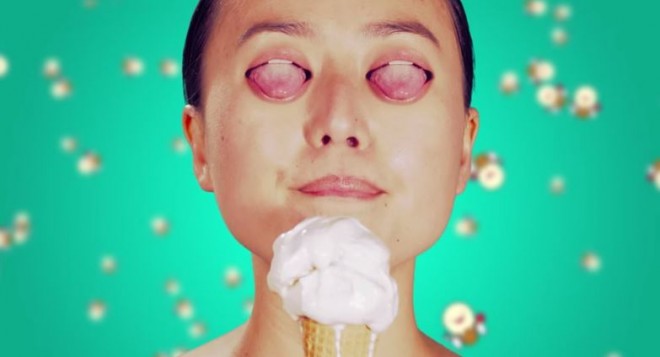 You might not think a brand that prides itself on being creepy could find broad-based success. But in Philadelphia, there’s actually an ice cream company that specializes in testing the boundaries of normal.

It may not be the ice cream itself that makes Little Baby’s Ice Cream famous for its creep factor. But the company has published a series of ads over the past two years that have made viewers squirm.

One of its most famous is a video depicting an androgynous model covered in marshmallow fluff, scooping the substance out of his (or her) skull with a spoon and eating it. The video has been viewed more than 7 million times on YouTube:

Another ad shows a woman with mouths for eyes:

Still, believe it or not, Little Baby’s Ice Cream prides itself on the creepiness of its promotions. The company’s founders, Pete Angevine, Martin Brown and Jeffrey Ziga, wanted Little Baby’s to be part ice cream business – part bizarre art project.

So far, that model seems to be working. Aside from the off the wall ads, the company also offers some unconventional ice cream flavors. So for example, you can try Little Baby’s Earl Gray Sriracha, cucumber dill, green apple garlic, Maryland barbecue, or pizza flavors, just to name a few. There’s even a hotline for customers to call in and make flavor requests, the more outrageous the better, apparently.

“You can put anything in this vessel of frozen cream and sugar, and people are going to be open-minded to it.”

Though certainly not for everyone, this type of ice cream business definitely stands out from everything else that’s available. With so many ice cream shops populating all corners of the country, it can take a lot to be really different.

Currently, Little Baby’s Ice Cream has two shops and four tricycle stands around the Philadelphia area. The company also supplies ice cream to more than 20 specialty grocers in the area, and is planning to expand into neighboring states over the next few months.

The founders, who met years ago through Philadelphia’s burgeoning arts and music scenes, didn’t expect for the company to grow as fast as it has. But it seems the business that started with a desire to shake its customers from complacency with way out flavors and jarring marketing campaigns has truly found a niche.