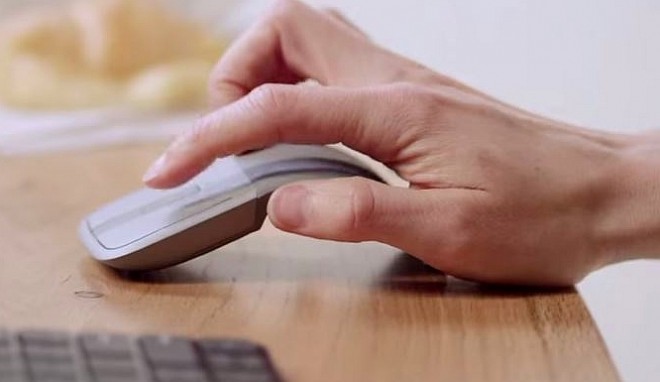 The new Arc Touch Bluetooth Mouse measures 2.32 by 5.12 inches and can work on just about any surface…from up to 30 feet away. We have no idea why you would want to work on your laptop or tablet from that distance though – and just saying, you could.

Now, we know what you’re thinking. This is certainly not the first wireless mouse available for those who want a bit of flexibility. but the Arc Touch Bluetooth Mouse is unique in that it connects to devices like laptops and tablets via Bluetooth 4.0 Low-Energy technology.

That’s the same kind of technology that lets a smartwatch give you updates from a smartphone tucked safely away in your pocket.

Previous wireless mice from Microsoft have used a USB nano transceiver instead.

The USB devices are supposed to use more energy than the newer Bluetooth model. And no matter how discreet nano transceivers might be, they’re still occupying a USB port.

So the new mouse should be more energy efficient and leave more USB ports open. Add to that the fact you won’t be stuck carrying a USB plug around just to use your remote mouse.

This video  gives a brief glimpse of the new device in action:

Like previous generations of the Arc Touch Mouse, Microsoft’s latest accessory features a touch strip between the left and right buttons. The touch strip allows users to navigate sites and screens.

Microsoft says the Arc Touch Bluetooth Mouse also uses Blue Track technology. This is supposed to allow you to use the new mouse on any surface even in a limited space.

The Arc Touch Mouse has a slim design. As its name indicates, it has an arc contour to mimic the curve of the palm. Mouse buttons are on the face of the down-slope of the device.

The bend in the Arc Touch Mouse can be flattened for when you’re on the move. A quick tap relaxes the arc. In the pocket, it’s no bigger than a small smartphone.

Bending the Arc Touch Mouse also toggles the power. It’s on when it’s curved and off when flat.

The new device is now available at the Microsoft Store and at retailers for just less than $70.

In addition to the new Bluetooth mouse, Microsoft has also introduced the Wireless Mobile Mouse 3500 Limited Edition, a device that still uses the USB nano transceiver of previous generations.