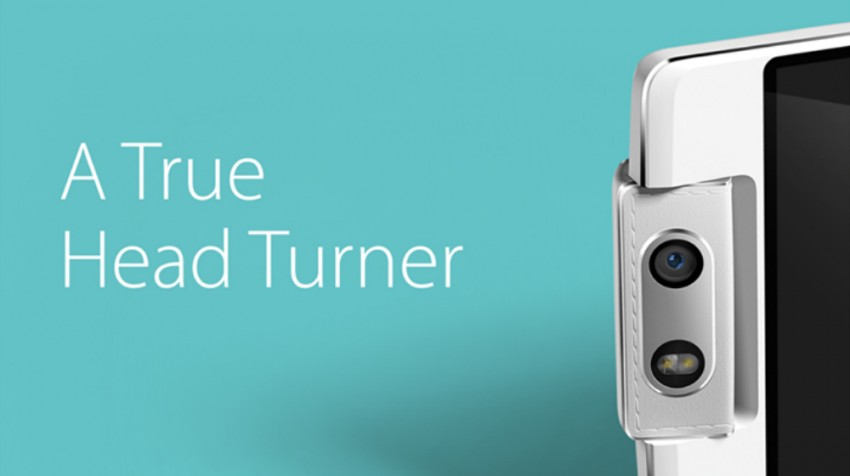 The new oppo N3 phone has a camera that can’t miss. That’s because it can swivel 260 degrees and Oppo is hoping its new N3 phablet is a real head turner.

Actually, it’s more likely that the Oppo N3’s own head will turn while creating better photo opportunities for you. The company has released several images of its new plus-sized phablet. Perhaps the most interesting thing about this device is its swiveling camera.

Yes, a camera that swivels.

So when you want to snap a photo or record some video, all you need to do is swivel the 13-megapixel camera on the Oppo N3 phone in the direction of the action. For selfies, the camera mount swivels back to face you.

This certainly is an innovative way of improving the overall quality of images such a camera can capture whether taking shots from a front-facing or back-facing position. It may also demonstrate once and for all that integration of better cameras is the focus of most smartphone development these days.

Consider one of HTC’s most recent devices, the Desire Eye. While imagined as a phone first and foremost, the device also carries a front-facing camera of the same caliber as the 13 megapixel rear-mounted camera. Until recently, the trend has been to use a much less powerful (and presumably cheaper) front-facing camera for selfies or even video chat.

But recently posted images of the N3 on Facebook and elsewhere show a unique approach to the problem. The device is built like any other traditional smartphone, except at the top where the camera is located.

The camera head appears to be separate from the camera body allowing it to swivel in a variety of directions. And a duel-led flash appears to be mounted on the swivel head next to the camera as well.

The Next Web confirms previous leaks on the Oppo N3 phone indicating the device will be available in two materials: Stainless steel or aluminum lithium alloy.

It appears the N3 will feature a 5.9-inch phablet-sized screen, too. And GSM Arena has confirmed other specs to be included on this interesting new camera too. For instance, the Oppo N3 phone should be stocked with a 1080p HD display and be running an Android system on a Qualcomm Snapdragon 805 chip with 3GB of RAM.

Oppo is planning to unveil the new N3 at an event in Singapore Oct. 29. No word yet when it may be available in the U.S.