Startup Plum Print Can Turn Your Kids’ Artwork Into a Book 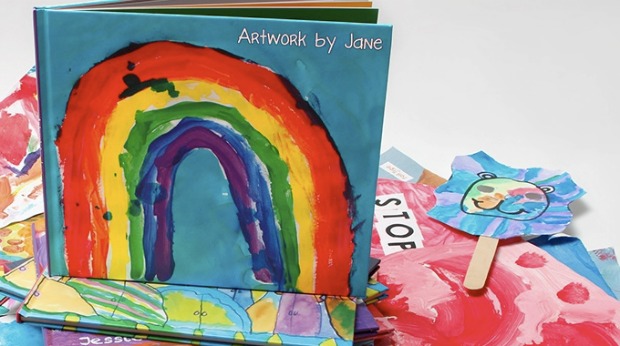 If you have kids, then you probably have huge stacks of artwork lying around your home. Wouldn’t it be nice to have a system for keeping and showing off that artwork without taking up all the space in your home?

That’s why Carolyn Lanzetta started Plum Print. The company takes all of those finger paintings and stick figure drawings you have lying around or tacked to your refrigerator and turns them into custom coffee table books.

According to Lanzetta, the average child brings home over 800 pieces of artwork by the end of elementary school. So a fair amount of parents are likely to have enough artwork to fill multiple books. Although the actual art might not be museum-bound, most parents value their kids’ artwork for sentimental value. They likely value it enough to want to keep at least some of it in some capacity.

To use the service, users place a $40 deposit, then send in their kids’ artwork in a designated “Plum Parcel” they receive from the company. Plum Print then takes the artwork and designs a layout to best suit each piece. Users get to choose the size and a few other design elements like the cover layout. They also have final approval of the book layout before it’s printed and sent out. They can also choose to still keep the original artwork along with the book, which can be made in both hard copy and digital copy.

In a Power Pitch segment on CNBC, Lanzetta said:

“Plum Print is giving parents such an easy way to preserve these precious memories that over 90% of our surveyed customers plan on ordering again.”

Founded in 2012, the company was bootstrapped from the beginning. It managed to turn a profit in just 10 months. The company is also working on some future expansion projects, such as the ability to offer online galleries of kids’ artwork.

The idea behind this company seems pretty simple. Finding a way to keep and display this type of artwork is a pretty common issue for parents. So Lanzetta seems to have found a simple and effective way to do so.

The company’s future could be bright, especially if it’s able to adapt to technology with new offerings like online galleries. Kids have been bringing home artwork they’re proud of for years and that seems to be a concept that isn’t going anywhere.