Find Out Why Learning Beats Knowing and Read “Rookie Smarts”

A research-based business book that shows the benefits of being a rookie and shows how to maintain a rookie mindset to overcome challenges and innovate. 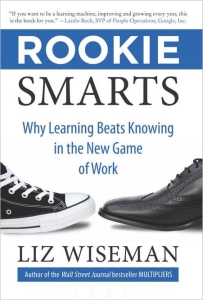 My friend was beside himself, “This shouldn’t be happening to me! What was I thinking taking on this project? I’ve been working on it way too long and I just can’t seem to get it right. I’ve told the client we were going to deliver today and now it looks like it’s going to be a week late!” When I asked him why he was so upset, the root of the issue was that he considered himself an expert. With more than twenty years of experience in manufacturing, he was completely derailed over this challenge.

Luckily, I’d just finished reading my review copy of Rookie Smarts: Why Learning Beats Knowing in the New Game of Work by Liz Wiseman (@LizWiseman) and what I said to him transformed who he was being from frustrated and angry to excited and ready to take on his challenge with a renewed energy.

Why Being a Rookie is a Good Thing

We’ve all been taught that being experienced in what we do is the holy grail of success. Our goal has been to get out of the newbie stage of whatever we’re up to as fast as possible. Well, it turns out that there are some real benefits to being a rookie. Not only that, but our goal should be to stay in that rookie mindset as long as possible because rookies have a way of being that actually makes it easy for them to overcome obstacles that experts can’t see beyond.

In Liz Wiseman’s new book, Rookie Smarts, younger workers can actually get excited about their lack of experience and more experienced workers can let go of the pressures associated with always having an answer.

After studying 400 workplace scenarios, Wiseman and her team compared how rookies and veterans handle various work assignments and what she found will surprise you. She identified what she calls the “rookie mindset” that’s characterized by for distinct modes. Each mode is a component of how people tend to think and act when they are doing something for the first time.

Wiseman is a former executive at Oracle corporation, she worked as the vice president of Oracle University and for seventeen years as the global leader for human resources development. She is the best selling author of the book Multipliers. She is an executive advisor, speaks around the world and has been listed in the Thinkers50 ranking.

Rookie Smarts seems to be written for larger organizations and mid-level managers. But I think that small business owners can easily embrace its lessons. In the same way that I was able to use Wiseman’s research findings to inspire and empower my friend, small business owners will find plenty of examples inside these pages to help them shift into their discomfort zone.

One of the examples I really loved came on page 183.

“When the Beatles disbanded in 1969, Paul McCartney wasn’t yet ready to hang up his guitar; he wanted a second act. In the final year of the Beatles, the celebrity lifestyle had become oppressive…McCartney decided he wanted to do it all again, only differently. Instead of relying on his superstardom to launch a new band, he let it go and just let it be. He formed a new band; Paul McCartney and Wings, with his wife, Linda, and two musicians who had played guitar and drums for his earlier recordings. He said “We knew nothing and we had to learn it all again. We had to learn how to be a band.”

Chapter Summaries and Appendices Are Assets

Each chapter contains a summary to help you integrate all the fantastic stories that you’ll find. I think this is a great asset to the book because it’s easy to get more engrossed in the story and forget that you can actually implement this for yourself and your business.

The appendices are loaded with frequently asked questions and discussion guides that make this book a great resource for management teams. I will say that some of the advice is a little naïve (for most main street corporations):

“Try to get fired – Instead of playing it safe, just play. Don’t overthink or second guess, just do what feels right.”

This might be a great practice in some progressively managed companies, but I think a lot of managers might stumble on that one. I will say, however, that I do know a handful of CEOs who complain that their staff plays it safe. But the bottom line is, read the advice and take on as much challenge as you can. Go ahead, push the envelope.

Rookie Smarts is a smart read for business owners, experienced managers as well as those just starting out in the workforce. Anyone looking for a way to shift their context from “not good enough” to inspired and energized will find something of value here.