You’re Never Too Old to Start a Successful Business 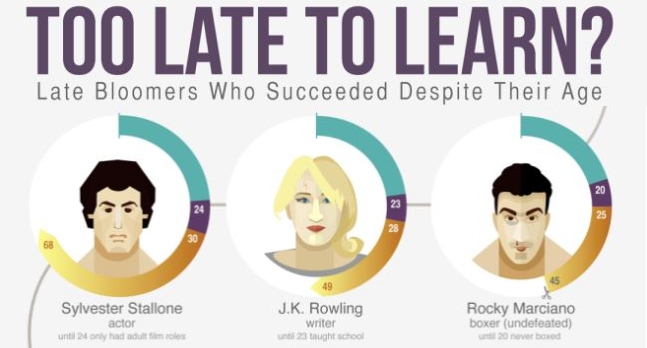 Think you’re too old to start a business? Think again.

Mark Zuckerberg may have started Facebook at 19, but he’s in the minority of entrepreneurs. Through the years, there have been plenty of successful people in business and other endeavors who didn’t get started until a bit later.

Funders and Founders recently shared an infographic outlining late bloomers who displayed proficiency in a variety of fields showing that great achievements don’t always happen at a young age. Among these are J.K. Rowling, who taught school until age 23. Vincent Van Gogh, who didn’t paint until 27. And Martha Stewart, who didn’t get into home decorating until 35.

Entrepreneurs like Mark Zuckerberg might have the crazy ideas and youthful energy it takes to be successful, but experience matters too. Just because someone finds success later than his or her peers doesn’t make them less successful overall.

In the Funders and Founders research, Information Designer and Infographic Author Anna Vital shares some of the reasons some successful people might have bloomed later than others.

“Learning something late in life might sound like a bad deal if you compare yourself to all the young talented folk. Understandable. The catch is that doing something earlier does not necessarily make you better at it than if you did it later.”