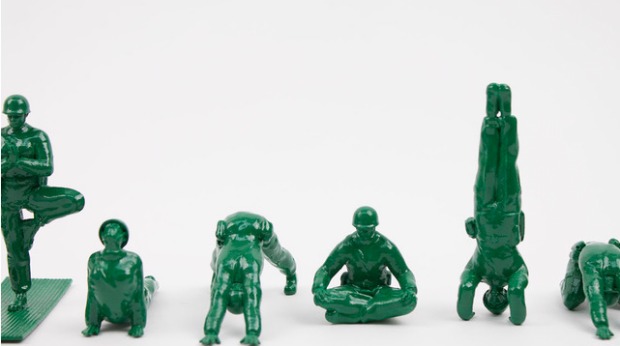 Yoga isn’t normally thought of as a masculine activity. But there’s no really good reason for that. The benefits of yoga can apply to both genders and all age groups.

So Dan Abramson is looking to get more men interested in yoga. To do this, he’s taking a somewhat unconventional approach. He isn’t opening a yoga studio for men or starting a line of men’s yoga accessories (though he has done that already). Instead, he’s working on a line of action figures that look like green toy soldiers doing yoga poses.

Abramson hopes that the action figures, which he calls Yoga Joes, will provide some comic relief while inspiring men and children to give yoga a try. He told the Huffington Post:

“It is still often written off as a ‘chick sport’ because women are the ones you usually see carrying the yoga mats. But the truth is it’s fantastic for both men and women.”

The Yoga Joes project was successfully funded on Kickstarter, raising more than $108,000, well over its $40,000 goal. Abramson hopes to have the Yoga Joes ready for purchase by the holiday season. They’re currently available for pre-order on the Brogamats website, costing $25 for a set.

While yoga isn’t yet considered a widely popular activity for men, at least in this culture, it is gaining some traction. Popular male athletes like LeBron James have sung its praises. And experts have brought up other benefits it can have, like helping veterans suffering from Post-traumatic stress disorder.

So it seems that Abramson’s product could be part of this growing trend. It’s certainly an unconventional method for getting people into a sport. But if its successful funding is any indication, he might just be onto something. On the projects Kickstarter page, Abramson wrote:

“I’m hoping people pass Yoga Joes around as an inexpensive gift to friends and loved ones, who might like to give yoga a shot. Plus, I hope yoga fans display them proudly in their homes, offices, and yoga studios. And I hope kids get to be acquainted with yoga from a young age – celebrating military men and women for their focus and discipline.”