About the only type of plugins you won’t find in this list are simple social sharing buttons. If you’re interested in those as well, head over and read the post on the top 10 social media plugins for WordPress.

Important:  To use many of the plugins below, you’ll need two numbers: a Facebook App ID and an App Secret key. These numbers allow Facebook to assure that it’s you and only you who has access to your updates and other Facebook information.

To speed you on your way, there’s a quick step-by-step tutorial on obtaining both numbers at the end of this article.

This plugin is as easy as they come. Simply configure the settings for WP Facebook FanBox, add the widget or shortcode where you want it to show and presto, a Facebook updates feed appears on your website. It even includes a couple of different themes so you can more closely match your site’s look and feel. 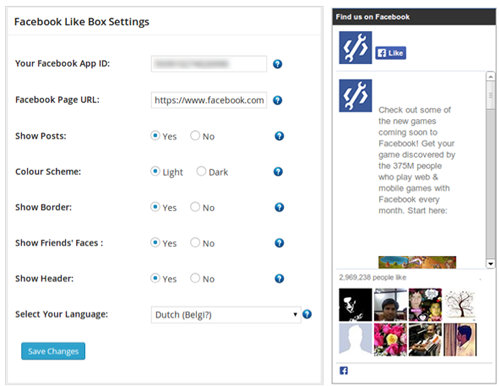 Very similar to WP Facebook FanBox, the Facebook Members plugin has a different style than most fanboxes thus it’s included on this list too. Here’s how it looks when timeline updates are set to “hidden”. 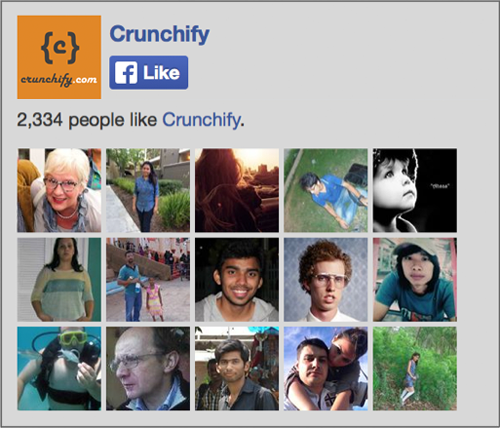 Easy Facebook Like Box is as easy to use as the previous two plugin however, it adds responsiveness (as do many of the following plugins) so that the Facebook box looks good no matter on which device (desktop, tablet, phone) your website is viewed.

The Facebook Wall and Social Integration plugin adds a whole slew of customization options that are straightforward and easy to use. The developer also offers a pro version that adds even more. 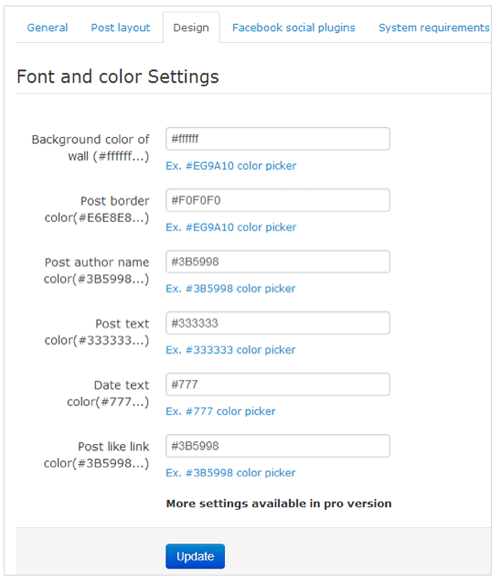 The developers do offer a premium version of the plugin which includes different tab styles from which to choose, tab placement options, the ability to turn off or on the tab for mobile users and more. 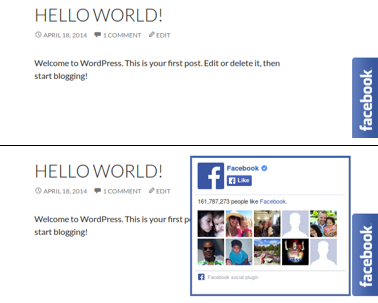 The final plugin of this type to make the list is the Facebook Page Promoter Lightbox that adds popup functionality to the mix; a feature that can increase the number of likes your Facebook page receives. 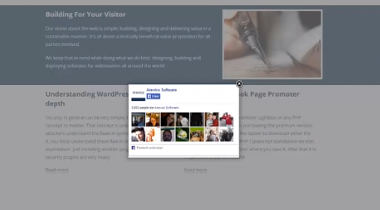 Free Facebook Plugins for WordPress that Go Beyond the Timeline

If images are all you want to show, then the Srizon Facebook Album is the right choice. Simple and straightforward, you can display a thumbnail of each Facebook album which, when clicked upon, will display a gallery of the album’s photos. Each photo can then be clicked upon to view a larger version within a lightbox.

In the premium version, you can show more than 25 images per album and more than 25 album thumbnails per gallery. You can also choose which Facebook albums are shown or not and the image caption (or description) is fetched from Facebook and shown beneath the lightbox. 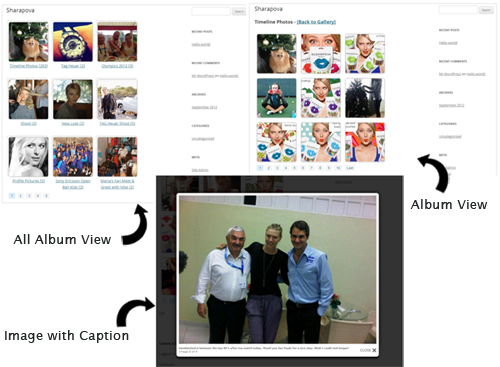 The free version of the Feed Them Social plugin is bursting with great features and functionality. Fully responsive, this plugin can display text, images, videos, events and more from Facebook as a box or even as an entire website page.

There are a lot of customization options as well, but what really makes this app standout is the fact that Feed Them Social can also display feeds from Twitter, Instagram, YouTube and Pinterest. Now that’s handy!

The premium version enables you to set the number of updates, pictures, or videos to show for each individual social feed. It also includes simple widgets for all the feeds and also enables the shortcodes to work with WordPress’ standard text widgets.

The Custom Facebook Feed offers a ton of customization options (see the image below for a small sample) for displaying everything from Facebook updates to events. You can’t show images and videos in the free version, but this plugin’s still worth a look.

Upgrade to the premium version and you can include images and videos plus you’ll get additional customization options such as additional templates, filtering by update type (e.g. text, image, video, event, etc.) and more. 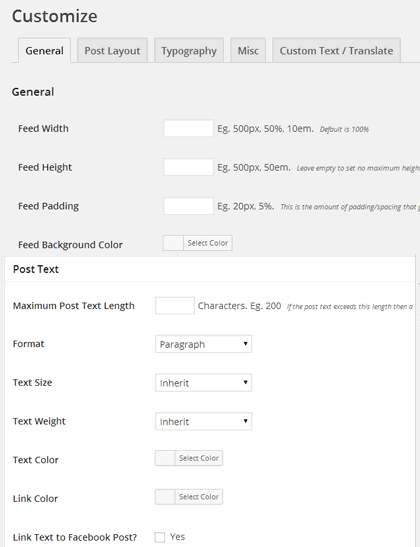 Yet another feature-rich plugin, the IK Facebook Plugin is another strong offering. The free version of this plugin offers solid functionality however, as with the other plugins in this section, you need to upgrade to the premium version to see its true strength.

Free Facebook Plugins for WordPress that Automatically Publish Your Posts

The handy Facebook Publish plugin adds a sidebar widget to WordPress’ new post/page screen that enables you to share the post on Facebook either right when it’s published or at some future date. One nice feature is the ability to share your post on the timelines of multiple pages all at once. 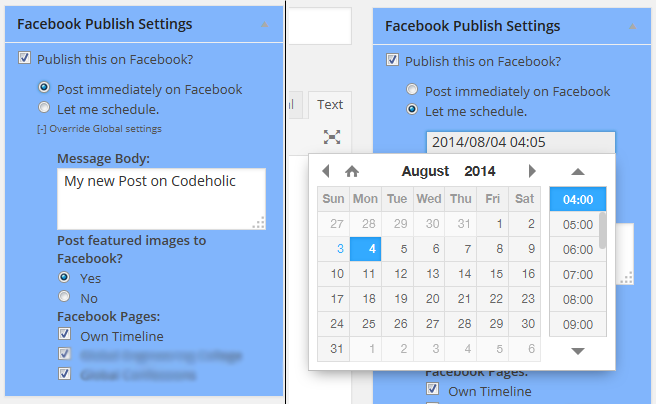 As with the previous plugin, Facebook Auto Publish enables you to share your posts on Facebook as soon as they are published. Though it does not include a scheduling function, it does offer a way for you to pre-format your Facebook updates, a nice time-saving feature. 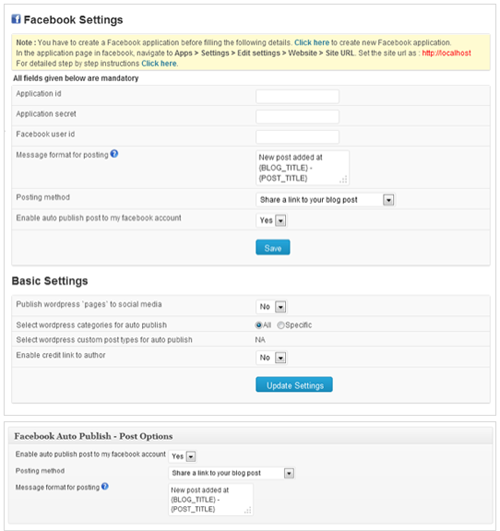 You may remember the Revive Old Post plugin from 10 Free Twitter Plugins for WordPress. The good news is that it works just fine for Facebook as well!

This is a truly useful plugin, especially for a business that has built up a large archive of content on its blog. The plugin publishes your posts to Facebook with a set delay between each update. Throw in the ability to filter by category or post and this plugin is a great way to maximize your investment on post creation and build your fan base on Facebook.

Truly a utility player, the Facebook Thumb Fixer plugin is a fix for those who have issues with their post images when their content is shared on Facebook. If this is something you’ve encountered, you’re going to love this plugin for the easy fix it provides.

While, for the most part, this list doesn’t include any social sharing plugins, Image Sharer is an exception and is just too useful to ignore.

This plugin does one thing and it does it really, really well. When website visitors hover over any image on your site, they are shown social sharing buttons that encourage them to share your images (see the image below for an example).

Though this functionality has been available from Pinterest for a while now, Image Sharer expands the available social networks to include Facebook and Twitter as well. Now that’s an important feature! 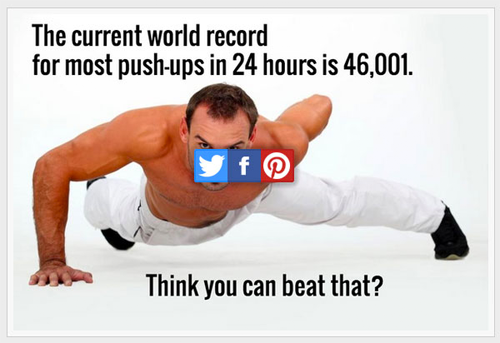 As outlined in the beginning of this article, to make use of most of these plugins, you’ll need to create a Facebook App ID and App Secret Key. Here’s what you do:

When using Facebook in conjunction with your WordPress blog, apps like these can create a great sense of engagement and another way to gauge and collect feedback from your community. Consider which one will work most effectively for you.

Matt Mansfield is the Tech Editor and SEO Manager at Small Business Trends where he is responsible for directing and writing many of the site’s product reviews, technology how-to’s, and lists of small business resources as well as increasing the reach of our content.
19 Reactions
Subscribe
Follow @smallbiztrends
RSS LinkedIn Pinterest iTunes