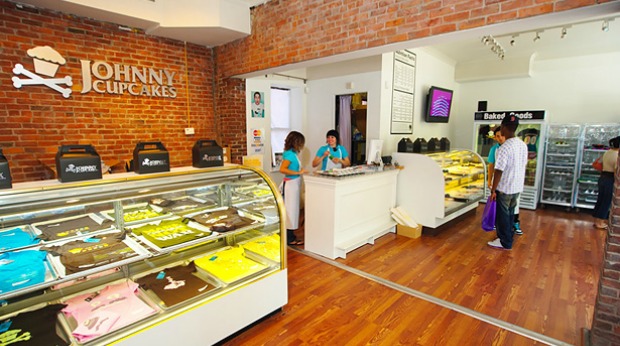 When creating a local business, you can choose a couple of different paths. You can go the safe route and use inexpensive but practical displays to show off items. Or you can create an all-encompassing experience.

That’s the dilemma that faced Johnny Earle, CEO of Johnny Cupcakes. The company sells designer clothing not baked goods. So when Earle relocated his store to an upscale part of Boston in 2005, he chose to create an experience around his brand’s unusual name. And that decision, according to Earle, has made all the difference. He told Inc:

“I could have saved a tremendous amount of money by going to Ikea and purchasing inexpensive displays. But I decided to spend all of the money I had to create an experience.”

To do so, Earle went all-in on a premium location. Instead of spending the $700 per month on rent for a location off the beaten path, he chose a location on Newbury Street. The neighborhood is home to some of Boston’s most upscale clothing stores. The location cost more than $7,000 a month.

On top of that, Earle chose to create interesting displays for his items going along with his bakery theme. He showcased t-shirts on baking trays accompanied by labels containing nutritional facts. He used industrial mixers as décor. And he even used vanilla air fresheners to make the store smell like frosting.

All of that paid off with the store’s grand opening. More than 400 people camped out in front of the shop. And the store made more than three months worth of rent in its first days’ receipts alone.

Much of that success is certainly owed to the experience Earle created. T-shirt shops are basically everywhere. And although the business already had some name recognition, the new location and experience was essential for setting the brand apart from its competition. Without the unique vision of its founder, Johnny Cupcakes could have very easily faded into the background. Instead it has become a designer icon.

Today Earle has six shops including one in London in the UK, (he calls them bakeries) and delivers his product worldwide.