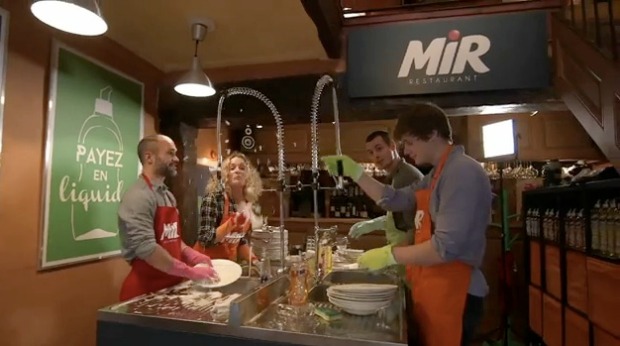 Don’t have enough money to pay your restaurant bill? Well, you might have to stay and wash some dishes instead.

For a few days last month, one restaurant in Paris put that idea into practice — literally. Of course, the whole thing was planned as a promotion for some dishwashing detergent.

Here’s the story of why one French eatery changed its name and even its facade, and all to trade some fine Parisian cuisine for a few dishwashing chores.

Diners at La Bastide d’Opio found themselves up to their elbows in suds last month when the restaurant stopped accepting money altogether, instead asking them to wash dishes in exchange for food.

The arrangement could hardly have been a surprise to most. During the same period, La Bastide d’Opio changed its name and even transformed its outside appearance.

The establishment became instead Mir Restaurant, named for the Mir dishwashing detergent that, through more than coincidence, customers were using to clean the dishes after each meal.

A dishwashing trough was added as the central element of the restaurant, where diners used Mir detergent to clean up in exchange for their meals. The video below shows some scenes from the pop-up promotion:

Mir Restaurant also put together a specialized sort of menu, with prices given in terms of the amount of dishwashing that would be needed to pay for each item. For example, a customer would have to wash four pieces of cutlery in exchange for a mozzarella and tomato gratin. Or they could wash a whole saucepan and its lid for a duck confit.

As crazy as this might sound, basically for three days customers at the restaurant ate for free. Although, of course, they had to put in a little elbow grease after the meal to make sure the plates were squeaky clean in return.

And, of course, makers at Mir dishwasher detergent are probably hoping they noticed how clean those dishes got thanks their product.

In the end, of course, both the restaurant and the detergent got a fair amount of brand visibility as a result.

What lesson can your small business take from this?

Probably that brands can sometimes work together in unconventional ways that can send a strong message to customers — and maybe to the general public too, if you’re lucky.

But also, it’s important to remember that marketing should be used not just to draw attention but also to amplify your brand’s message. If your marketing can show your product or service in action as the Mir Restaurant promotion did, so much the better.