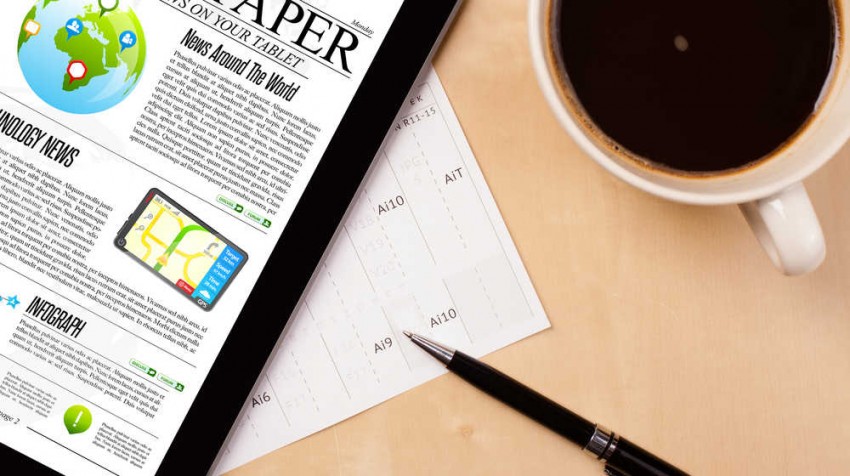 The U.S. Small Business Administration is asking customers to #DineSmall this Small Business Saturday. A major Web hosting company put millions of shares of stock up for sale this week. And a crowdfunded tablet is ready to go. These stories and more await you in this week’s Small Business Trends news and information roundup. Enjoy!

Endurance International Group Holdings, Inc., the owner of BlueHost, HostGator and a variety of other brands marketing hosting and other cloud services, is preparing a public offering. The company says it is planning to sell 13 million shares of public stock at $14.50 per share. A release issued by the company says 3 million shares of this stock are being sold to raise approximately $41.

Leveraging and Deleveraging in the Small Business Sector

Data from the Federal Reserve’s Flow of Funds report shows that non-financial, non-farm, proprietorships and partnerships have deleveraged considerably since 2009. From 2009 to 2013, liabilities as a share of proprietors’ equity of these businesses declined from 92.4 percent to 68.8 percent.

A device being touted as the “world’s first crowdfunded tablet” from Finnish company Jolla has surpassed its $380,000 goal in just over two hours. And the campaign for the tablet on Indiegogo has already raised more than $1 million. #JollaTablet has now raised over 1M USD in just 37 hours! We’re overwhelmed, thanks a million!

Your Next iPhone May Take Photos Like A DSLR Camera

We’ve seen some rapid advancements in cameras for the smartphone in recent years. But to date, all these advancements have really only turned a smartphone camera into a moderate to high-end point-and-shoot. The Samsung Galaxy S4 Zoom brought us a zoom lens attached to a smartphone. Earlier this year, Panasonic introduced the Lumix CM1.

The importance of having a mobile website for your business is increasing by the day. More consumers now access the internet using mobile devices instead of desktop computers. But just setting up any old mobile site isn’t enough. You likely put a lot of time and care into developing a professional and user-friendly website.

Samsung has unveiled Flow, a new device handoff feature that will eventually let you start an activity on one device and move it to another. This means you could eventually get an email notification on your smartwatch then switch to your smartphone or tablet to read.

Salesforce today launched the Desk.com App Hub. The company calls it a “one-stop shop to easily deploy partner apps that extend [the use of] Desk.com.” Desk.com is Salesforce’s customer support application for small and midsize businesses. SMB businesses use Desk.com to manage customer support interactions coming over email and social channels.

People who purchase a Chromebook before Dec. 31 could be getting free storage on Google Drive for the next two years. Google announced that customers purchasing Chromebooks from select retailers, online outlets and Google Play will be eligible for the deal.

Most 13-year-olds spend their time playing games and just trying to get through middle school. But not Shubham Banerjee. Instead, he founded his own company, Braigo Labs Inc. The company, a producer of Braille printers, just received funding from Intel Capital, making Banerjee the youngest-ever recipient of venture funding from Intel.

The farming industry is going high-tech. And it isn’t necessarily just to increase output. For some farmers, using more technology has become a necessity thanks to changing climate conditions. Founded by two former Google engineers, The Climate Corporation is a provider of tech services and products for farmers.

The De-Waster 5000 is a helicopter that scoops plastic out of landfills and the ocean then uses a flamethrower to melt the trash into beds for homeless people. It’s not a real product. But it is a creative prototype that was thought up by a 10-year-old as part of the Global Childrens’ Designathon.

How to Boost Your Retail Sales Into the New Year

If you’re putting all your focus on the holiday sales season, you’re neglecting a huge opportunity — the chance to boost your retail sales after the new year, which is typically a slower time of the year for many. Plenty of people will be heading into stores in January to exchange unwanted items, cash in gift cards or spend gifted money.

Insights From Google About How Small Businesses Can Improve Sales

We’re used to thinking about Google as a search engine. And of course, we also think of Google for products such as Google Apps for Work, and the AdWords advertising platform.

Junk removal isn’t a very glamorous industry. But when Jerry Flanagan was looking for a new entrepreneurial venture, it seemed like the right fit. It turns out that choosing a career in the junk removal industry was a great decision. It helped Flanagan’s business succeed through the recession.

Hey video creators, would you like to set a new YouTube custom channel URL for your YouTube channel? Now YouTube is letting users claim custom URLs for their channels to align with their display names, Google+ Business Pages, vanity URLs or other linked websites. You can even change the capitalization or accents/diacritics of your custom URL.

Andrew Shipp loves to talk about social media content. As social media manager for GoPro, he’s got a lot to share. GoPro’s creative, versatile and robust approach to social media engagement offers a tantalizing view of what can be accomplished when a ferocious social media strategy leverages timely shares, visual content and a cross-platform energy.

Think You Can’t Afford a Butler? Alfred Could Prove You Wrong

Have you ever wished you had your own butler, like Bruce Wayne’s Alfred? Most people could use a little bit of help with their housework and chores now and again. But few have the money and resources to hire live-in help like Alfred. If you’re one of those people who could use some minor assistance, there’s a new solution that might want to consider.
News update photo via Shutterstock