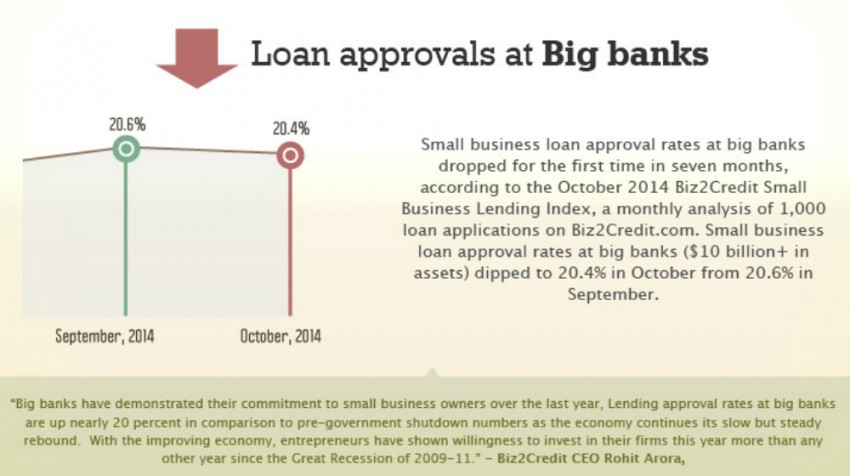 Though this new data represents a slight setback for small businesses, Biz2Credit CEO Rohit Arora says the October rate is still 20 percent higher than it was in November 2013.

Commenting on the official release issued with the Index results, Arora explains:

“Despite the small drop in approval percentages, big bank financing of small businesses is up nearly 20 percent in comparison to last November when the economy was reeling from the government shutdown. With improving economic conditions, entrepreneurs have shown willingness to invest in their firms more this year than in any other since the Great Recession of 2009-11.”

Some of the decrease in big bank loan approvals may have to do with an increased presence of institutional lenders moving into the marketplace.

Biz2Credit has only begun monitoring loan approval rates from institutional lending to small businesses since January but the approval rate has increased every month. That includes a jump to 59.7 percent in October up from 59.5 in September. Arora explains:

“People are seeking to do capital investments and are looking for money and shopping around. You can easily shop online and get longer terms. Institutional lenders have capitalized on the decreasing demand of short-term loans, which often came at a high cost and were granted by alternative lenders.”

Arora adds that reaching out to small businesses is helping institutional lenders connect with them. The competition means small business owners have options when it comes to choosing a lender. Arora adds:

“Big banks have demonstrated their commitment to small business owners over the last year. However, institutional lenders are moving into the marketplace and attracting some high quality borrowers.

But the weaker lending trend for small businesses continued at small banks last month, too. Approval rates from small banks to small businesses dropped from 50.3 in September to 50.2 percent in October. That’s a five-month slide for this lending segment, based on Biz2Credit’s data.

“Some smaller banks are paying the price for being slow to accept online applications. The increased competition from big banks and institutional lenders are hurting them because higher quality borrowers are going to these competitors instead of small banks.”

Alternative lender support of small businesses continues to dip, too. Biz2Credit’s data shows that approval rates from cash advance companies and other non-bank lenders dropped for the ninth straight month. That approval rate slipped from 62.6 in September to 62.1 percent in October.