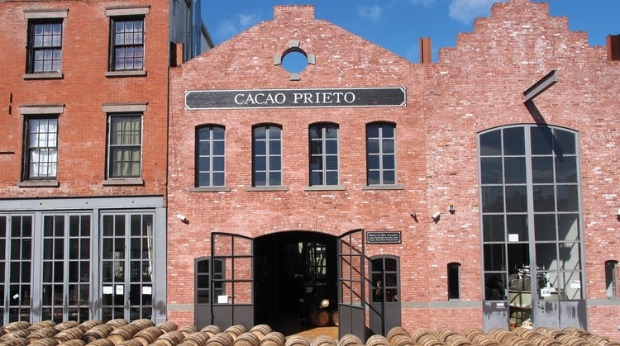 Opening a craft distillery in New York City isn’t exactly a novel idea anymore. But Widow Jane Distillery, near the corner of Conover and Coffey St. in the Borough of Brooklyn, is hardly your average distillery.  Here an innovative entrepreneur combines chocolate and bourbon for a unique business that seems to be paying off.

Founder and owner Daniel Preston is a former aerospace engineer who has had a string of successful inventions and startups. After selling a parachute technology company he founded, he decided to refurbish his family’s hundred-year-old defunct cacao farm in the Dominican Republic.

It was there that Preston began experimenting with chocolate making techniques. He then founded Cacao Prieto, a chocolate supplier, and Cacao Biotechnologies, the laboratory where he conducts flavor experiments with said chocolate.

So today Preston’s chocolate business and distillery work together in tandem. Head distiller Vince Oleson even produces a variety of chocolate infused rums and liqueurs.

“We’re trying to change the way people think about what goes in their bourbon.”

And that change is essential to the business’s success. Looser state licensing regulations and growing demand for artisanal drinks has led to an influx in this type of business in recent years. There are currently about 50 functioning distilleries in New York, and at least seven independent distilleries in Brooklyn alone.

So an independent distillery opening in the area needs some kind of niche or special product in order to stand out from the rest. For the Widow Jane Distillery, the combination of a distiller and chocolate factory provides that important distinction.

For a business with such expensive ingredients and stiff competition, finding success is hard enough as it is. Preston told The Guardian:

“The economics are just not in our favour. Everyone said we were crazy. They said it couldn’t be done and then they said it wouldn’t make a difference. I wanted to prove them wrong.”

The Widow Jane Distillery is currently supplying over 1,600 bars, restaurants and liquor stores in New York City. And they’re working on going national within the next several months. So, for the time being at least, it seems as if Preston’s unique gamble has been a success.