Personalized LEGO: When a Swag Mug is Not Enough 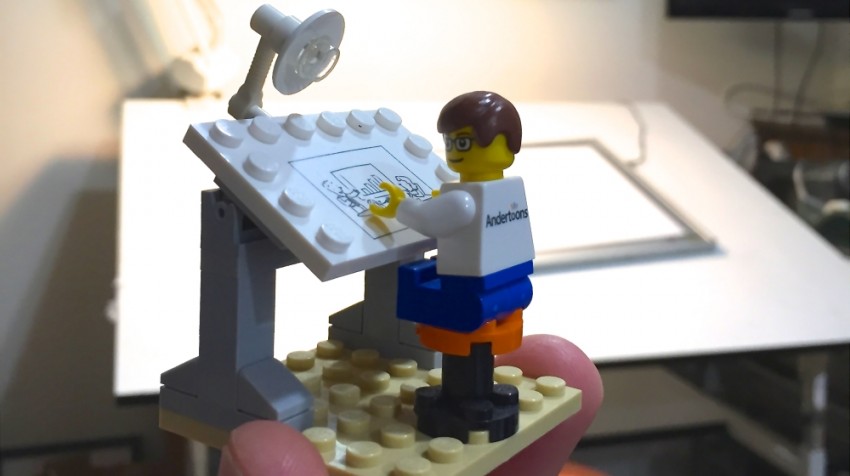 So what kind of marketing promotion could he do that would have that “WOW!” factor?  What kind of thank you gift could he send to customers?

The answer was to turn himself into a personalized LEGO figure sitting at his drawing board, and ship himself out to the customers!

“I’m a huge fan of LEGO and I’ve been wanting to do something like this for years,” said Anderson, in an interview to Small Business Trends. “But I could never quite come up with an idea related to my cartoons. Then one day I was looking at my drafting table and I could see how it could be made out of bricks and it all sort of came together.”

Costing between $20 to $25 per kit, Anderson chose to go the self-made route, making the kits himself, rather than commission a company to do it for him. However, he had to specially order some LEGO parts, including from overseas. Lego specially customized two pieces just for him.

Take a look via video of our CEO putting together this personalized LEGO marketing gift:

“People are usually surprised to find out that I did everything myself,” he said. “I designed the model, ordered the parts, created the instructions, sourced the printing, assembled the boxes, etc. I worked really hard to get it as close to a real LEGO set as possible.  And I think it turned out nicely.”

It may also surprise you to learn that the LEGO company was not involved in any way in his personalized LEGO project. As Anderson points out, “it’s not a LEGO product.  I’m not trying to present it as such, and I’m certainly not profiting off of it.”

However, if LEGO came knocking with any proposals to work together, there wouldn’t be much thinking about it!

Andertoons began cartooning 15 years ago. He decided that being a cartoonist was more enticing than his then-current job as a screws salesman. So he did what Dilbert creator Scott Adams did. Before work, on his lunch breaks, and after work, he would draw and send out his cartoons, hoping for a client to take him on. After successfully securing a few small markets, he hit the jackpot with Reader’s Digest.

Anderson sells his work almost exclusively from his site at Andertoons.com. He sells subscriptions and specially commissioned cartoons.

Most of his big-sellers are business-related, which is why they have a natural home at Small Business Trends. But he also has a column at the popular GoComics.com, alongside big hitters such as Garfield, Dilbert, and Calvin and Hobbes.

He still uses ink and paper. But having just bought a tablet, he is hoping to soon join the digital revolution.

When he is not making people laugh with his cartoons, he has to take care of business. He has to do all the other things involved with running a one-man small business. For example, there’s the paperwork.

He also tries to do some marketing on social media, but admits that he struggles with that.  “Of course I’m on Facebook and Twitter and all that,” he said.

“But I do find it difficult to keep up with both the business and the marketing end of things. Mostly, I just make sure I have good website fundamentals.  I leave a trail of breadcrumbs on social media. And I concentrate on being as consistently funny as I can,” he added.

And when he is not being funny, he is playing with those LEGO bricks with his son. He says he does it to relax. So when he buys LEGO for his son, he ends up buying them for himself, too. And from there he got the idea for a personalized LEGO marketing gift.

But had he ever foreseen combining his love for LEGO with his business? His reply left no room for doubt.

“I think if you told me 15 years ago I’d be a professional cartoonist with an office full of LEGO, I’d have backed away from you very slowly.”