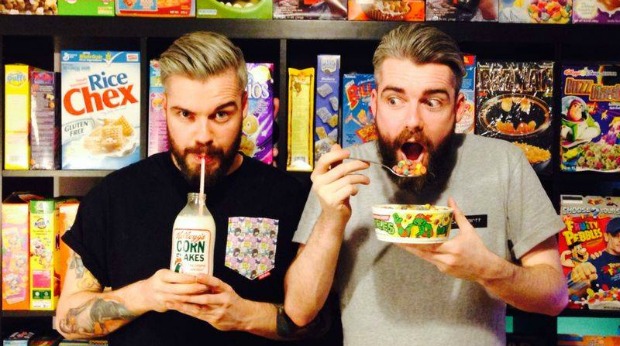 Think back to breakfast time during your childhood. What were you eating? If you grew up during the 80s or 90s, it’s pretty likely that it involved sugary cereal of some kind.

So even though a lot of people today are focusing more on healthy breakfast options, these cereals offer some nostalgia for the people who grew up enjoying them. And that’s what the Cereal Killer Café in London is banking on.

Identical twins Gary and Alan Keery opened the Cereal Killer Café earlier this month. In addition to the actual cereal they serve, the business is upping the nostalgia factor with Formica furniture and old cereal boxes adorning the walls.

It’s an unusual concept for a business. Cereal certainly isn’t a growing market in the developed world. In fact, cereal volumes in the U.S. have fallen by seven percent over the past five years, according to Mintel. But nostalgia can be a powerful thing. And this business is less about the actual cereal and more about the experience.

For years, businesses have used nostalgia to gain customers and get people talking. From subtle design inspiration to actual products modeled after older items, it seems the retro trend is one that isn’t going away.

So the question remains. Will 20-somethings go out of their way to eat at a restaurant that serves sugary cereals from their childhood? Your gut might say no. But when they see that little reminder of their favorite childhood breakfast in the window, it might just be enough to pull them inside. And once there, they might even enjoy the all-encompassing retro environment enough to come back or tell their friends.

Even though the business hasn’t been open long, it seems that people have been affected enough by the nostalgia to take notice. Gary Keery told CNN Money: