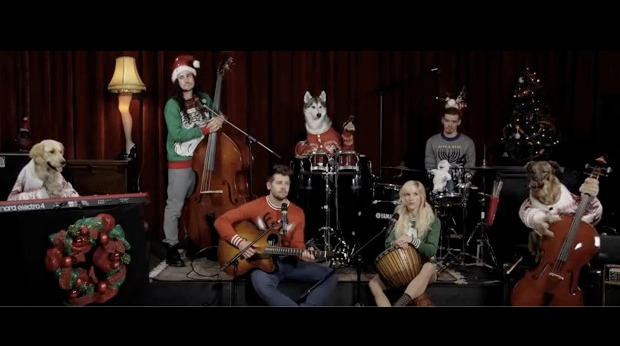 Christmas songs “sung” by barking dogs have become a seasonal favorite for many. But one enterprising band took this concept to a whole new level by creating a video featuring live, not animated, dogs playing musical instruments.

The video shows the band Walk Off the Earth in holiday attire performing the song “Little Drummer Boy.” But along with the band, three dogs appear to be playing their own instruments: a keyboard, a cello and drums.

The dogs are really just sitting there while people play the instruments behind them. But the visual trickery is pretty impressive and definitely unique. I encourage you to watch the whole video below:

In today’s world of online marketing, getting a video to go viral can be a huge break for creative entrepreneurs like musicians. So while this video might just seem like a fun idea some friends decided to do for laughs, it was likely much more intentional and aimed toward creative seasonal marketing.

It has a few things that make for great viral content: a recognizable song, unique style and cute animals. This type of video could definitely get noticed by a lot of people who have never heard of the band Walk Off the Earth before. To date, the video has been viewed on YouTube more than a million times.

So all of those people who are new to the band’s unique style of music might then decide to browse around the YouTube channel a bit or even visit the band on other platforms. Of course, the end of the video features some links and a call to action. And the band also has some other covers of well-known songs that people are likely to recognize on its channel.

At the very least, people who come across the video have now heard of the band. So they might be more likely to have a positive association or at least a vague familiarity if they hear about Walk Off the Earth again at a later date. And the addition of the infamous leg lamp in the background from the traditional holiday hit, “A Christmas Story,” adds yet another humorous touch.