Learning to Fly a Horse: A Path to Personal and Business Creativity

In the book How to Fly A Horse, Kevin Ashton shares how everyone can access creative problem-solving to create effectively. An especially good read for those who are in creative industries such as marketing, design, or advertising. 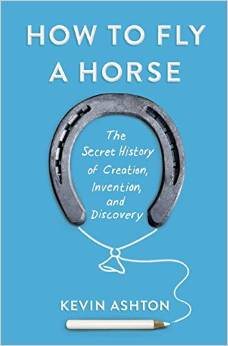 Creativity is and has always been an elusive concept for humans. It’s doesn’t matter if it’s a Van Gogh creation, Apple product, or Michelangelo’s David , creativity is something that everyone wants more of. Unfortunately, creativity is the very thing that most of us feel that we are lacking.

It’s not for a lack of trying, though. Creative individuals have been studied, analyzed, and scrutinized for hundreds of years. But their abilities are still hidden in mystery. Everyone in an attempt to be more creative has participated in at least one creativity workshop or tried reading a book on creativity.

Despite all of the books, workshops, and research studies, most of us will remain in the “stick figure” drawing phase of creativity. Only a select few of us will go on to create amazing works of art on the scale of Michelangelo’s David.

The Problem: Finding Creativity in a Haystack

In “How to Fly a Horse: The Secret History of Creation, Invention, and Discovery,” Kevin Ashton argues that our beliefs about creativity are actually the problem. Specifically, it is the myth of creativity. Creativity, Ashton says, is not the domain of a few lucky individuals. It is something that resides in all of us.

How did the author come to this conclusion?

Like everyone else, Kevin Ashton believed that creativity was not for him. Frustrated with his weak results at creativity, Ashton researched people like Leonardo Da Vinci and Van Gogh to master creativity. What he found is that creativity is not exclusive, but the myth is.

Creativity has been around since the beginning. Unfortunately, creative people weren’t important enough to mention, in most cases. The names of important rulers and deities were more important. That’s why we know more about the rulers behind the construction of the pyramids than the artists who painted inside them. Despite all of the millions of creative individuals that existed, only a few are remembered throughout history.

Things changed close to the Renaissance period, but the notion of a creative genius or rare creative moment persisted. That is why we flock to creative people, instead of looking within ourselves. We still believe in the notion that creativity is something reserved for the few, whether by genetics or divine talent. We believe that creative moments come few and far between, so we focus on those “Aha” or “Eureka” moments.

The Big Idea: Failure & Persistence Are the Way to Creativity

Having laid out the foundation that creativity lies in all of us, the author goes on to debate other myths about creativity. Using anecdotes from creative individuals throughout history, Ashton seeks to prove that extraordinary moments didn’t lead to their success. In fact, it was the opposite. Their creativity came from things everyone does: think, work, learn, and repeat. The difference between a Picasso and a developing artist is what he or she does while working on their art.

How to Fly a Horse places a strong focus on dismantling the creative moment myth as a single moment of inspiration. Ashton argues that creativity arises from all of the work leading up to that moment. Unlike what you read or see on the movie screen, creativity is not a straightforward process in any sense. It is a messy maze of failures and incremental successes.

Ashton says that we should embrace that maze and use it to our destination. That destination begins when we ask the right questions and follow through to an answer. Creation happens because of a need to improve or fix something. Using that problem, creators should look to the past (what’s been done before) and provide the time and focus to guide their future attempts at creatively solving a problem. The author spends the remainder of the book discussing how we can create better in the future.

To sum it up all, creativity is not a gift for the select few. Creativity lies within the reach of all of us, if we know what to look for and how to proceed. Not every business can be Google or Amazon, but every business can find creative ways to address their particular problems if they are willing to find their own creativity.

How Can This Help Your Business?

The Verdict: A Worthwhile Read or Over-Written Hype?

How to Fly a Horse is a worthwhile read for any small business owner, especially those who are in the creative industries, such as marketing, design, or advertising.

The main focus of the book is on the individual, not on a team or business level, though the process is conceptually similar. It is similar in style and format to many recent books on creativity (most notably “Outliers”). But it goes into more depth about the particular behaviors that lead to more creative problem solving.

If you have ever wanted a deeper insight into becoming more creative, How to Fly a Horse will point you in the right direction.

Kevin Ashton is an author, speaker, and multi-business technology founder. He can be found at @Kevin_Ashton on Twitter and on his website. How to Fly a Horse is available for pre-order on Amazon (release date January 2015).