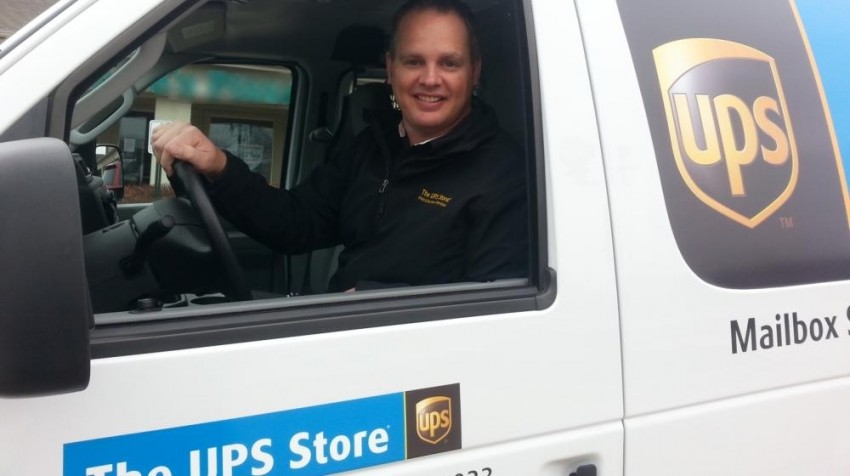 Have you ever thought about owning your own business and thought maybe a franchise would be a way to do just that?

One possibility is opening a UPS Store franchise. But you may be wondering exactly what owning such a franchise might mean.

In fact, the experience may be more active and involve more creativity and innovation than you might have ever imagined. Even though a franchisee is operating under The UPS Store banner, it’s actually a small business and often a family-run one, too. And owning a UPS Store franchise is rewarding — not just in a financial sense but in other ways as well.

Picture in your mind a day when you have to figure out how to “double crate” a fragile, glass art sculpture, ship iced cupcakes without them falling apart, serve customers with a ready smile and eagerness to help, rely on your loyal and well trained team to keep the profitability wheels turning, and take the company van out for pickups and to drum up more business.

It also happens to be a business you are taking over from your parents, who are retiring.

That is the life that Brett Robertson (pictured) has. From all appearances, he is loving every minute of it. You can feel the energy and enthusiasm radiating from him. It stems from the satisfaction of running and building a small business in his local community. We sat down with Robertson recently to learn what it’s like to be UPS Store franchisee. 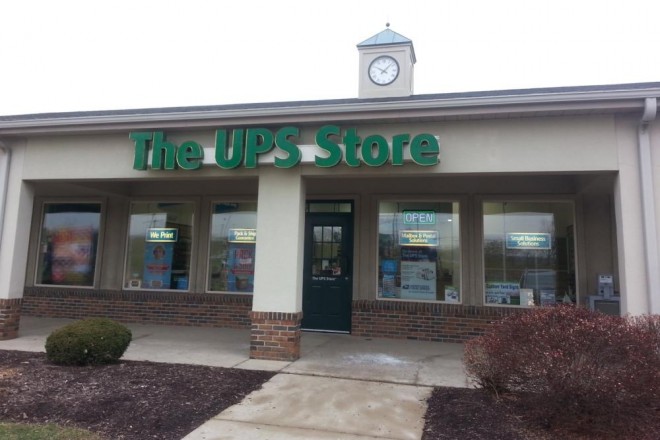 Bill and Sue Robertson opened their first store in 1989 under the banner of Mailboxes Etc. (which became The UPS Store in 2004). They opened their second store in the same small town in Ohio in 1997.

Fast forward to today. Bill and Sue Robertson are easing their way toward retirement. Sue Robertson is still involved daily with the business, keeping the books using QuickBooks.

Brett Robertson, their son, has found himself taking over. He originally had another career planned. He got a degree in criminal justice, and after graduating, became a police officer.

In one sense, he’s a lot like other franchisees. Many have had diverse careers prior to becoming franchise owners.

At present, he’s still a part-time local police officer, but when the crime-fighting uniform comes off, he goes into The UPS Store customer service mode. 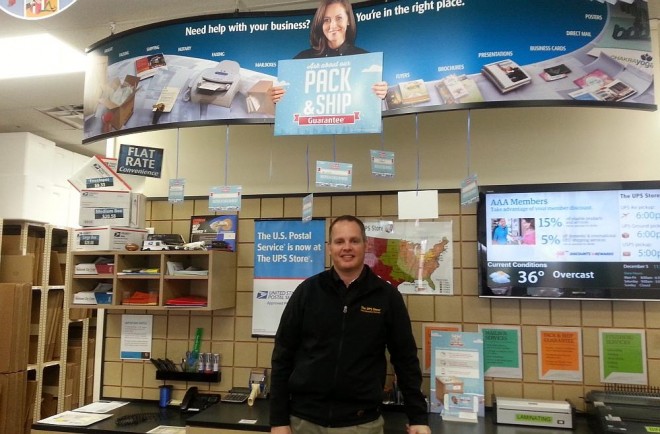 A Day in the Life

With his workday starting at around 8 a.m. (9 a.m. if it’s his turn to take the kids to school), Robertson faces a number of things he has to do until closing at 6.30 p.m.

As he told us, “This is not a business where you can just sit and wait for customers to come in. Customers will come, but if you want to grow you need to do more.”

Robertson uses his The UPS Store van to scout around the neighborhood and call on other businesses. (He calls his van “great mobile advertising.”) Antique stores are one source of business he calls on because they ship nationally and internationally on a regular basis. He also picks up shipments using the company vehicle.

Robertson likes being in charge of his own business, but credits much of the success to his loyal staff for manning the stores each day from open to closing. He has a manager he can trust at each store, enabling him to stay mobile. “I’ve had my share of bad bosses, and I like to think I’ve learned from that,” said Robertson. On average, members of his staff have several years’ longevity. In fact, he said, “three former employees have come back seasonally to help with the Christmas rush this year.”

Packing and shipping is the kind of thing that Robertson revels in — the hands on stuff — where boxes are constructed, the peanuts are poured in for padding, and everything is packed for wherever it has to go. He even finds himself in his own garage at night sometimes experimenting with creative crating and packing.

Whether you’re shipping bronze statuettes to Paris or a huge bird cage, he’s your man.

“We can’t fit a car in here, but we certainly can ship a car. We can ship the entire contents of a house,” he added. 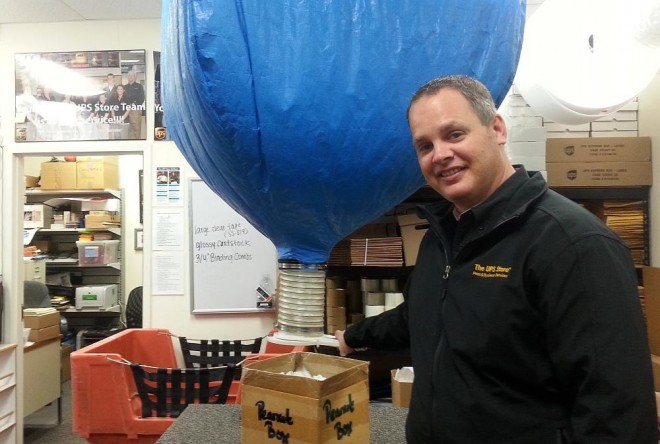 There’s always something new to learn and try out — including how to ship cupcakes. To serve a local small business bakery, his store has shipped several batches nationally and internationally to test how the confections fared in transit.

“Everyone reported back with a picture of how the cupcakes turned out. The first few shipments didn’t look so well when they got there. The key is to make them look as nice as possible, and you want them as fresh as possible.” He added, “Through tests and trials, the process has greatly improved.”

Robertson lists word-of-mouth as crucial. He knows that bad service can lead to people not coming back or telling others about what they experienced. So he is determined to make their experience in the store a positive and pleasant one.

Some of the marketing channels used by The UPS Store franchisees are billboards, Facebook, Yelp, and local print magazines. But he says the best way is the old-fashioned way — just go out and talk to people.

His two UPS stores serve small businesses and individuals. There is an online printing website where customers can design their own cards, flyers, yard signs and stickers.

In addition to packing and shipping services, his stores also offer mailboxes (with an actual street address, instead of a P.O. Box number).

Individual stores get access to technology and product innovation from franchise headquarters. 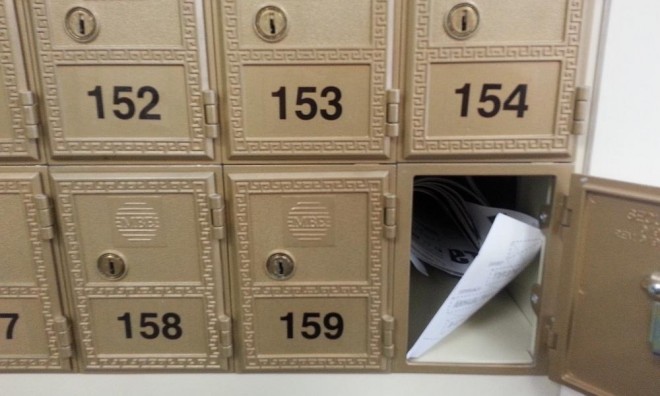 As a UPS Store franchise owner, you might wonder how much freedom you have. Robertson insists that it’s very much up to each individual store owner to make a success of their franchise business.

You aren’t taking orders from the franchise headquarters. “Yes, you have to follow certain rules, such as how a store is laid out and the products and services you sell in it. And you pay a small royalty to the franchisor.” But aside from that, it’s really all on the individual owner, he added.

The UPS Store franchise headquarters offers conventions and training sessions for people like Robertson and his staff. Speakers give advice on business topics ranging from engaging with your community to maximizing profits.

The networking potential between UPS Store franchise owners at these events is priceless, he added.

Going to these conferences, Robertson realized that there are other owners just like him — other family-run UPS stores, which have been handed down from the parents to their children.

It is not an automatic transition, he was quick to point out. The next generation owner still must meet all franchise requirements. The new owner must sign a franchise agreement (a 10-year agreement, a length customary in the franchise industry).

When first setting out, the franchisor sends the franchisee designs of how the store should be laid out, and where each thing — such as displays — should go. This is to ensure that a customer can get the same experience regardless of which store they visit. The franchisor also designates tools and software needed to do the job, such as credit card processing software.

After that, the franchisor takes a big step back and lets the franchise owner get on with running their business, although there is a field operations team in place for assistance and resources at The UPS Store Headquarters including IT and marketing support.
There’s a list of approved vendors to use, but Robertson views that as a good thing. “They negotiate good prices for our benefit,” he said.

Otherwise, the franchisor lets owners like Robertson get on with running the show. 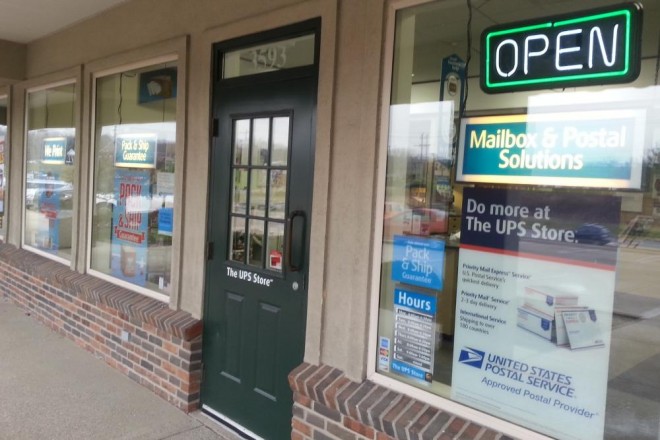 What is the Biggest Success Secret for a UPS Store Franchise?

“Location!” says Robertson instantly. While many factors affect your success, “Location is the single biggest factor. Being tucked away may save you a couple hundred bucks a month in rent but it is not going to get you many sales. So get out into a prominent spot. You will get more business.”

His outlook for the future? Maybe a few more stores … down the road. But Robertson is content and in no hurry.

Mark O'Neill is a staff writer for Small Business Trends, covering software and social media. He is a freelance journalist who has been writing for over 25 years, and has successfully made the leap from newspapers and radio onto the Internet. From 2007-2013, he was the Managing Editor of MakeUseOf.com.
30 Reactions
Subscribe
Follow @smallbiztrends
RSS LinkedIn Pinterest iTunes