James Ross of HedgeChatter: Turning Millions of Tweets into Stock Tips in Realtime

We all know that millions things are posted on Twitter, Facebook and other social sites every minute of every day. And this constant flow of information is disrupting the traditional way many activities are done. Buying and selling stocks is no exception, as things that the right people tweet can make you money, save you money, or cost you money if you’re not paying attention in realtime.

James Ross, cofounder and CEO of HedgeChatter, discusses how social media has changed the way people evaluate stock trading decisions, and how signals coming from tweets, blogs and posts of all kind are becoming just as important as company fundamentals and technical analysis – and could be a leading indicator of how big data coming from social media will be integrated into (and impact) other aspects of decision making. (This transcript has been edited for publication. To hear audio of the full interview, click on the audio player at the end of this article.) 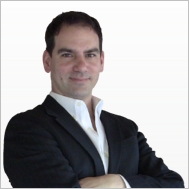 Small Business Trends: Can you tell us a bit about your personal background?

James Ross: My background has been analyzing and correlating data sets and trying to figure out the best way to monetize that. I had an international voice-over-IP company I co-founded. We took traffic from the U.S. down to Latin America. We actually had a sports book and casino that wanted us to provide them toll free numbers in the U.S. for their U.S. customers to actually call down to Costa Rica.

One thing I noticed through call detail records was when people would call in, there was a certain subset that would call in 15 to 20 minutes before a game every single time. And so we correlated this information, and what we found is these people that called in 15 to 20 minutes before each game, whenever they called in and placed their bets, won every single time.

James Ross: A lot of people say, well, ‘how did they know?’ And our perspective was it really didn’t matter how they knew. The fact was they knew what was going to win and if we knew what they knew, we would be able to generate a profit.

So years later, we merged some methodologies together to create HedgeChatter, which basically mines social media to find the next movers for the stock market.

Small Business Trends: Talk about the importance of integrating conversations taking place on social networks in a way that helps in buying and selling stocks.

James Ross: Five to ten years ago, the traditional way you’d look to make an investment or trading decision is you’d look at fundamental data and/or technical data. And where it’s fundamental data, you’re basically looking at management teams, earnings per share and all the information behind the company. At the same time, when you look at technical data, you’re looking at volumes of shares that are being traded and trying to find patterns.

Now with social, we’re able to understand what new opportunities people are looking at as far as potential ideas for stocks to get into. For instance, when Ebola broke out here in Dallas five, six weeks ago, I knew nothing about Lakeland Industries, who they were, what they did, what they offered. However, as their stock had been straddling for $5.00 to $7.00 over the last year, they suddenly had a massive amount of chatter volume. And we were able to see that a lot of people were indicating that this would be a good buy, and that generated a social media financial buy signal for us. And of course, five days later the stock ran up 125%.

You’re not going to see that on technicals until after it’s happened. Because if you were to backtrack technicals over the last year, all you would see is a $5.00 to $7.00 spread. You would never know it was going to break out to 125%. But when people found out Lakeland makes hazmat suits that protect you from Ebola, they were going to be a big winner in the biotech sector. And we were able to detect that with HedgeChatter. That’s one of the many benefits of why people have to start including social media into their strategy now to generate new ideas and stay ahead of the curve.

Small Business Trends: What HedgeChatter is doing is basically listening to all that’s being talked about, and then being able to find the insights that can be used in real time to make a quick decision – a sell or buy decision. It’s like a big data play.

James Ross: That’s correct, and it definitely is a big data play. We’re processing almost 2.3 million financial chatter messages every single day now. No one person could read all those messages out of all the blog posts, social media. One of the key components is, as we’re listening to people indicate buy and sell through sentiment and our analytics engines are processing this information in real time, we’re not only looking at what they’re implying buy or sell for now, but we’re also looking at their historic information.

The software automatically processes this information and lets us know what are good opportunities to get into.

Small Business Trends: Are you seeing people use a service like HedgeChatter from a short-term trade kind of thing or a long-term investment kind of thing?

James Ross: We have people using it for both. If you look at how wealth managers make decisions, and their decision-tree process, they look at a lot of information. And they’re usually looking over a longer time horizon; however, they want to be able to have all of the information. What we found is social media is able to see out as far as two to three months. So it’s basically kind of a quarterly snapshot.

Small Business Trends: When it comes to the importance of understanding emotion and making sense of it, it sounds like it’s pretty important in stock trading. But look a year or two out. How important is it going to be compared to today?

We knew there would be two tipping points within this space. The first was reached about three months ago, where basically all the big firms realized that this is very important to have. Probably about mid-2015, the second tipping point will be that you definitely have to have this now.

Small Business Trends: Where can people find out more about HedgeChatter?

James Ross: Hedgechatter.com. We have a $29.95/month signup that will give you really good functionality.